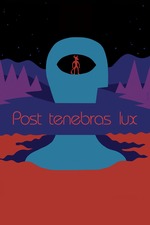 When doing some research I found that "Post Tenebras Lux" or Light after Darkness, was quite a polarizing film, which doesn't surprise me. Some called it beautiful, while others thought it was confusing. And I can see that... both I mean. Yeah, I'm kind of on the middle in this one, a rare stance, for the feature, but while I found plenty to admire I also felt lost and sometimes bored during this film.

Let me first say, that I was ready to love this film within it's first couple of scenes. A young girl running through a field against a beautiful purple sky. The edges of the image are blurry (and they're like this throughout the entire film) to make it feel like a dream. After this, we see an animated devil figure walk through a house. Already I was intrigued and excited for what I was in for; however, while I definately got some visual treats, I wasn't given a whole lot of substance, or at least much I could make out clearly.

The film I immediately compared this to was Andrei Tarkovsky's "Mirror", one of my favorites. "Mirror" is similar for it tries to accomplish essentially the same thing: An autobiographical non-narrative film that serves as a subconscious flow of thoughts, dreams, and memories. I thought to myself why "Mirror" made such a connection to me while "Post Tenebras Lux" came in at sub-par. Perhaps the scenes in "Mirror" were slightly more clearer. While on a first viewing not everything was obvious, I was able to connect the dots by the end of the film, and figure out who was who and what was what, and once again, I couldn't keep track of everything going on in Carlos Reygadas film. Heck, I don't think I even learned it was a random collection of memories until about half-way through. But then a bigger realization hit me. "Mirror" constantly feels dream-like through out the entire length. The camera is constantly moving as if floating on a stream of recollection and dying thoughts. And during more still scenes, the camera is still positioned in an interesting angle, along with some nice poetry accompanying the scenes. With "Post Tenebras Lux" however, many scenes just seemed to bring the tone of the film to a standstill. Stale shots of characters talking, or mediocre scenes with nothing to carry them except for the strange focus lens setting which I mentioned before, and now that I think about is used more as a crutch, than it is an effective tool. The tone feels slightly ruined, while "Mirror" puts you in a constant state of euphoria. The other thing is I don't think many of the memories presented are significant. Perhaps they are to Reygadas, but if so, they're not communicated very well. For Tarkovsky, even if the viewer can't describe exactly what's going on in a literal sense, you still get a feel for his intention and what the scenes mean. This woman is probably his mother, This woman floating is obviously a dream, this is the protagonist at boot camp. Some of the scenes in this film however include a guy cutting down a tree, two people talking, a couple arguing and I don't really know what I was supposed to gain from that?

Now I won't pretend like "Mirror" is the easiest film to understand, far from it, but even if you can't grasp exactly what's happening, there's always something captivating to get invested in. The oneiric tone is worth the mystery and confusion. Scenes in "Post Tenebras Lux" were sometimes just boring, since I had a hard time understanding who these characters were and who was who.

However, I do have compliments for this film. Quite a few scenes still captivated me, once I could tell what was happening. The film is always beautifully shot, warped filter or not. I would like to praise the acting, but the film jumps around so much I didn't even know how many multiple storylines or characters there even were. But anyway, as for compliments, I did get invested every once in a while whether that be an outstanding shot, or hoping that the film was going somewhere, I enjoyed parts of this movie, I'm far from hating it.

From someone who usually falls head over heels for this movie I was still a little underwhelmed. I still liked it a little bit, but I think it could have been either more clear or more abstract. I guess the only way to recommend it is for you to see it for yourself, so if this sounds like it's your thing, check it out!