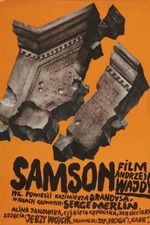 From famed Polish director Andrzej Wajda the director "Ashes and Diamonds", "A Generation" and "Kanal" considered his 'war trilogy. "Samson" is yet another World War 2 film which I greatly enjoyed just as much and focuses more on the mistreatment of the Jewish.

The plot is a lot more subversive than his previous films, and contains stark black and white cinematography and craftily positioned cameras. One scene that stuck out to me is in which the Nazis are boarding up the ghettos. The camera remains static on the Jewish citizens, while planks of wood are placed one by one, walling them off completely from our view. There's also some great handheld moments particularly in the beginning depicting an assault on our protagonist for being Jewish.

"Samson" portrays the discrimination the Jewish faced before and during the war. Our protagonist, is sent to prison for something he did not do, but is accused by his anti-semitic peers and with little support, is prosecuted anyway. After prison he is enclosed in a Jewish ghetto where he takes a job picking up dead people off the street. Yeah, it doesn't get any more depressing than that. There's a scene in which he tells someone outside the camp of his job and she just stares at him like "Holy Shit. That's Morbid as hell" There's plenty of symbolism of prisons and walls, considering how our main character, Jakub goes back and forth between these two environments. Even once he escapes these facilities, he still feels trapped cornered in by those around him and his own self-esteem. There's also allusions to the biblical hero 'Sampson' as you can imagine. I should add that our protagonist is not named Samson but merely meant to represent him. Jakub is strong in spirit rather than brute strength. He wrestles with insecurities inside of him, like faith, redemption and responsibility.

The only thing that put a dent in my experience was not so much the fault of the film, but more so with the DVD I watched it on. "Samson" could really benefit from a transfer, as the screen was letter boxed in an odd way, where the frame was stuck on the left side of the screen the whole time. Very weird aspect ratio choice, so here's hoping for a redistribution. Unfortunately not many know of this film even those who have seen Wajda's previous works. So I ask of you to check it out! Watch "Samson", support great art, and maybe someday it will be seen the way Wajda intended for us to see it again!