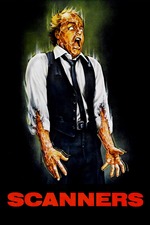 Oh well this doesn't seem excessive in any kind of way. This film looks like it's going to be a subtle, eerie kind of ...(reaches 7 minute mark) ... nevermind...

So, do people like this movie? Like they really liked it? I know David Cronenberg can be a divisive director at times, but seriously this movie was just flat out stupid. I thought I would really like David Cronenberg and his style, but as I trek through his filmography I'm finding myself growing more and more distant from any admiration I can have for him. I didn't care so much for "The Brood". It was okay but I couldn't find myself getting all that invested in it. Scanners, however makes "The Brood" look like "The Exorcist"! I appreciate some of the special effects but that's it. That's all this movie had to offer aside from it's paper-thin plot, senseless violence, poor world development, and ultimately atrocious acting.

It's funny because at first the film did seem to be taking it's time, and was showing things to you slowly which made me excited for what I was in for. However the film escalates immediately with a quite literal bang! You know what I'm talking about, the only thing that anyone could possibly remember from this dull experience. I think all the budget for this movie went into the guys head exploding, because it is glorious! I had to pause the movie so I could stop laughing and go take a 15 minute break. I wasn't even ten minutes in and I already needed a break from this curve ball that was thrown at me! "Was this the kind of movie I was in for?" I rewound cause I thought I missed a little and caught the head explosion again, so I had to wait another 15 minutes.

But all jokes aside I did take this as an actual criticism in some ways. Yes, it's a great effect and is a hilariously memorable moment in cinema but what are we supposed to take from that, what should we expect? Your movie started with a head explosion... where do you go from there?! Is it even possible to escalate higher, or is the film just going to seem tasteless and drab in comparison. Well the movie took the latter formula because that's exactly where the direction goes. By the way there was no blood to be seen anywhere after the explosion.

Let's move on to the hero of the movie: this dork who can't act for shit! Nobody, even the fans, I mean nobody can deny how awful this guy is. It's Wiseau or Birdemic level bad I swear. But my issue is with all the acting. That's right, this chump isn't the only one, let's give a big hand for weird artist guy! Yaaay! (No I don't remember their names and I don't care to) Seriously this scene was so painful to watch, to see artist guy try too hard and our hero not try at all. It's just an embarrassing play of unconvincing plights and actions.

So what's this film's plot? Well it's...Hahaha! Oh sorry, anyway in the world of the film their are psychic people called Scanners, because originality. However there are bad scanners who want (get this) world domination. Yes, I'm serious. What is this a Saturday morning cartoon? You couldn't have given the villains a more interesting motivation? So anyway these people at a good organization or some place find our main hero and decide to train him to hunt down the evil scanners. So yeah, this guy becomes an expert scanner in literally no time. I understand they're desperate for help, but how does he become so much more powerful than the others? They find a group of good scanners later, I don't understand why they couldn't just use one of the more experienced users unless I missed something.

As the plot ... Hahaha... progresses nothing more exciting than a head explosion happens. It's just as cliched as you can get of good guys try to stop bad guys, main good guy meets a hot girl for him, and they're the only two people who keep surviving everything. Meanwhile we learn absolutely nothing about our characters or how the psychic powers work on an internal basis or how it might effect others in the world. The scanning is used more as a device to 'try' and make the film stand out, but there's no hiding it's just an uninspired 80's gore fest with the psychic aspect to just move things along.

"Scanners seems like a mix between an 80's action thriller, and a corny B horror movie, two genres I just can't get into, but even by those standards "Scanners" is just dull and stupid. The film isn't doing it in a self-aware kind of way rather it takes itself so seriously. And if you want to have a minimalist plot and let things like the world, visuals, or other creative endeavors take command, that's great! I love films like that, but Scanners has nothing to offer after it's lame story. No delving into the characters, or any kind of unique angle of looking at this situation. The only thing is the scanning, but like already mentioned, we're never given any more insight on the extent of these powers. And there are a couple neat special effects but those are only at the beginning and the end. All that's inbetween is just a useless, tasteless romp through early 80's dumb entertainment.

Then there's a scene toward the end where the villain tells the hero that they are brothers and their father is the guy who discovered him. And what is our Cronenberg Cagney's response to this? I don't know, I don't think he even had one!

This movie is complete garbage if I ever saw such trash! This shit has a Criterion release! If you like this, that's okay, although I will never understand you. The only thing worth mentioning at all are the special effects which seems to be Cronenberg's real forte. He's great with prosthetics, but not so good at making a movie.