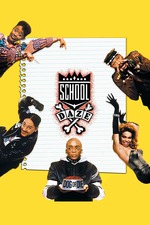 For a group dedicated to straight men, frat boys be doing some gay shit.

I'll make this quick. School Daze is an early Spike Lee film I always meant to see but skipped for some reason. I'm not a fan of college films at all, and this was sadly no exception. The only difference here is that it's an all black cast in the same setting and shenanigans with some racial commentary which I respect. It had a little more flare and an interesting dynamic with one of the characters, but there wasn't much else for me.

I'm not sure why it's called a musical either. There was one musical number about 15 minutes in, that actually felt like a traditional musical scene. This number was fun, well choreographed all the great stuff, but it's the only one like it.

Larry Fishburne was good in the movie. Him, Radio Raheem and some of his roommates were the other characters I was mildly invested in.

One of the weirdest endings I've seen recently. And I just watched "Diamonds of the Night"