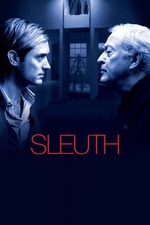 So I made the mistake of watching this version of "Sleuth" before the original, because I didn't know it was a remake and thought it was the original. I think what confused me was that I knew Michael Caine was in it so I thought "Well, Michael Caine is in it so this must be the right one." Not realizing that he appears in both films playing the opposite characters; the one thing I found kind of cool in this movie, for I didn't quite like this all that much. Afterwards I ended up watching the 1972 version, with my Dad and we both liked it a lot to my surprise! Based on the play by Anthony Shaffer, Joseph L. Mankiewicz final film contains a lavish set, nail-biting suspense, sharp, witty, dialogue, charming, yet dark sense of humor and of course, two outstanding lead roles. Kenneth Branagh's adaptation seems to take everything that made the '72 classic stand out and drained it leaving us with a dull, grey episode, with random bursts of hammy hilarity... and gay stuff, but we'll get to that.

I know I just defended Branagh in my "Frankenstein" review, a movie I feel is much better than is given credit for, but even as a Kenneth Branagh supporter I could hardly even appreciate this film, let alone enjoy it. Like I mentioned in said review, Branagh has a great respect for classic stories and tries his best to be faithful to them, so I have no idea why he decided to create something totally new. The obvious answer would be that he just wanted to try something different! He wanted a new take on the famous thriller, but I'm not sure what that new take is. Instead of anything being added, it felt like all the best parts of the play were removed, with the third act being really the only major change, and I can safely assure you that it's not as good as the original.

Now keep in mind, I watched this, and got about half way through it, before I saw or knew of the original, so while I'm comparing it the the '72 version, I felt a lot of these criticisms during my initial viewing. I did a little research and apparently the goal was to create a completely revitalized "Sleuth" that's nothing like the original, and I can respect that. Wanting to branch out and put your own spin on it, but like I said, I'm not sure what "spin" they wanted to do. It's almost like they filmmakers just got excited with doing something new with "Sleuth" and never came up with an idea of what that new thing would be... let's make them gay. This has been a defense of the film, but honestly it wasn't that much different to me. The dialogue is completely changed, (to lines that are no where near as clever, sophisticated or witty) and it's almost an hour shorter (50 minutes to be exact) The first two acts involving the fake robbery, and Officer Dopler are still present, but the final act takes a complete nosedive into uncharted territory, and becomes a meek guide for the audience not knowing what the hell it's doing.

The set appealed to me at first, but then it got irritating. I guess this was a part of Branagh's 'new vision' of making the house look more futuristic; however, the set is a monochromatic dark grey which makes your eyes sore after a while. It looks like an empty nightclub rather than an aristocratic mansion. It's as if they were trying too hard, and then ironically dissolved into dreariness. Wasn't a fan Branagh's handheld camera movements either. The way he zooms in on odd close-ups was just obnoxious to me. This is what puzzles me as Branagh seemed to have such good control of color and camerawork in his previous endeavors, it hardly feels like this was made by him. Well, okay that's not entirely true.

So you probably want me to explain what I'm talking about with the gay stuff. So instead of the original last act in which Tindle tricks Wyke, into thinking that he's killed his mistress, Pinter thought it would be a more riveting segment if we made them gay. Wyke asks Tindle to move in with him and gay undertones ensue. Look, as I keep saying I'm not against these changes on paper, and I'm certainly not against homosexuality in films. But when it's presented in such a ridiculous way as it is here, I'm going to make fun of it. These scenes are so awkward and bizarre it was the only time I laughed during this bore fest. Watching Michael Caine seduce the eccentric Jude Law was just so uncanny to me and could have been better accepted if the scene was handled better. But it just feels like not only a betrayal, but a mockery of the original, playing out like a bad Family Guy joke.

On the plus side, the music by Patrick Doyle is excellent as always. And I suppose all that I criticized was never awful the whole time, and had there fair moments of talent to showcase. For instance, the set did have some neat pieces from some of Britain's most famous artists

Michael Caine did his best and to be honest he's actually pretty good for what we got. Jude Law on the other hand has been bitten by the Branagh bug and is cursed for the remainder of shooting to be an off-hinged psycho. While Olivier and Caine were more subdued in their performances, Law seemed to be hamming it up a little too much. He came off as more of a street thug, which could have worked if Law wasn't constantly shouting and mugging. I think Jude Law is a good actor, so I mostly blame poor direction here, and this is the best summary of my problems.

"Sleuth" insists upon itself too much. It puts such an emphasis on all the aspects, but none of them are directed well or done with a purpose, leaving "Sleuth" an utterly superfluous movie. Not funny, not witty. Suspenseful at times but without that bite that made it so entertaining. And it's gay Honestly "Sleuth" is for the most part okay, however I can't think of anything this film did better than Mankiewicz' adaptation, so skip this and go watch the real "Sleuth" instead.