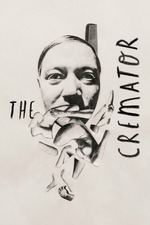 One of the few films to generate such polar opposite emotions out of me. Perhaps the only film that gives me chills and makes me laugh. "The Cremator" came out at the height of Czech New Waves success and features everything the country is known for, including eye-popping visuals, surreal sequences, a sense of humor and political subtext. "The Cremator" is like an older Yorgos Lanthimos film hitting many of the same marks such as dark comedy, a disturbing tone and an overall bizarre setting.

Describing this film as a comedy is a little difficult to assess and needs to be elaborated on. Admittedly I never laughed out loud or found the film funny in a joking way; more so that what you're seeing is so strange, that you're not really sure how to react. It created a sort of uncomfortable laughter with me, certainly a unique emotion I can't say I get from many other artwork. More horror comedies need to try this style.

The striking black and white visuals coupled with the editing creates another experience altogether. The scenes are cut more like fragments of events as if we're not witnessing anything subjectively. Instead we are given an outsiders glimpse that makes us feel like we're on a dark spiritual journey, or meditating on the evil lurking in men's minds.

Anyway, The film centers an a man named Karel Kopfrkingl, a crematorium owner who takes great pride in his work. He appears to be slightly deranged, even the opening hints at this, most notably with his belief that he is liberating trapped souls by burning bodies, and that the smoke rising in the air are their spirits returning to the eternal kingdom. Eventually Kopfrkingl gets caught up with the ever-growing trend of fascism, and his actions become more and more sinister.

Karel is shown to be a blatant hypocrite, First showing strong moral standards including not drinking and being loyal to his family; however, he is shown to drink on the job and sexually harass one of his female employees. The façade comes all the way down as the dark comedy portrays Karel murdering his family. He even sabotages his own Wife's funeral which I thought was a pretty funny scene. "The Cremator" indicates to us in these scenes that Karel never made any sense to begin with, that his own values either mean nothing to him, or his mindset is just so warped that not even he knows what's good or bad anymore. Like I said Kopfrkingl comes off as insane from the very beginning, this puts us on an uneasy edge as we watch this psychopath become more and more entitled.

As great as Kopfrkingl is and as devilishly performed by Rudolf Hrusinsky, I enjoyed plenty of other characters too. The equally evil and obsessed Hitler loyalists who light the spark in Kopfrkingl are represented as being just as evil as he is even without the involuntary cremation. His half Jewish family is enough to set him over the edge, but then his son shows homosexual tendencies which frustrates his father even more. Exterminating due to intolerance and slight differences. How unrealized fear itself is the devil. And of course there are Kopfrkingl's neighbors and friends who have some great sarcastic comments relating to what's happening as if they're the audience, and are the only ones detached from their world and think it's all ridiculous! Other characters seem to love Karel even if he treats them badly, Herz's attempt to show how ideologies can affect people, even when their corruption is right in front of their face.

One symbol I enjoyed in this film is that of 'Death' portrayed by a beautiful, but stark woman dressed all in black. Supposedly she was included in more scenes, especially the deleted ending, nonetheless I like how there isn't much attention drawn to her, and we simply have to point her out on our own. She almost reminds me of the antithesis of a Fellini-esque woman, the opposite of Claudia Cardinale's character from "8 1/2" She often appears during a scene of murder or other horrible actions Kopfrkingl commits. Strange enough, while Karel will acknowledge her and become angry with her simply for standing there, he never has a moment of clarity. Never considers that what he is doing is wrong. However, the black fate lurks anyway, as a reminder that no one is immortal or free from sin, if not to Karel, then to the audience as a symbol of retribution and hope.

Speaking of which most of the comedy was added in the film because director Juraj Herz wanted to lighten the mood. He didn't want to off-put people too much with the dark subject matter of Nazi's and murder, therefore tried to make the film a bit more entertaining. Paradoxically, I believe the comedy actually made the film more disturbing in a more alienating way, but I do enjoy the film as well, both as a comedy, and a fascinating piece of art ahead of it's time.

As for the themes of the film, it seems pretty obvious, with Karel Kopfrkingl finding interest in fascism and joining the Nazi cause. But to me, personally, it goes much deeper than that. This isn't just a distorted portrait of evil men, but it shows how bad men think, or even worse, how they justify their actions. Think about it, Hitler didn't think he was a bad guy, he believed he was liberating Germany! He was sharing his glory with the world and ridding it from a so-called 'inferior race!' Without a doubt the things that Hitler and Kopfrkingl do are horrible, but Kopfrkingl believes he is liberating souls. It's okay if he murders, because then he can cremate their bodies and free them from anguish forever! And that's what elevates this film for me. Serial killers, mental patients, rich sociopaths believe that they are good people, and that the things they do are for everyone's benefit! "The Cremator" is a story about an evil man who honestly believes he is doing good, and that, ladies and gentlemen, is truly horrifying.

Disturbing, strange, funny, intelligent, eye-popping, and overall "The Cremator" is morbidly entrancing. I believe a film of this kind has aged like fine wine and any modern cinephile who enjoys films such as "The Lighthouse" or "The Lobster" will find Juraj Herz's daring masterpiece right up their alley. Help me bring more attention to this film! You don't want to miss it!