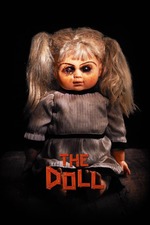 I watched this for some reason so now I got to review. Just painfully lazy and awful. There's not an original thought in this movie. It is every horror movie cliche about a haunted doll or house or whatever. The only thing I couldn't predict was the twist because of how stupid it was, and even if it was a good twist, I wouldn't care at this point.

So we meet an idyllic married couple who have the most perfect lives and everything is going great for them. This first scene with these two is a giant exposition dump in the most painfully obtuse way possible not even trying to make it sound natural. Honestly these scenes reminded me of Birdemic as everything goes great for the protagonists, and they're the corniest, sappiest people you'll ever meet. Anyway so some doll follows the man home and she starts haunting them all throughout their house. I don't know why these people think this doll is pretty, it looks like it's eyes are gouged out. And I thought that was just after the doll became possessed, but then the film flashbacks to the little girl and the doll still had all this black soot around her eyes. Who would build a doll like that, let alone buy it. Much later in the movie, some medium lady comes to their home to extinguish the spirit. Sound familiar at all?

The dialogue is hilariously awkward and unrealistic "Honey, Did you fart?" "No" "It smells like you farted, honey" "Maybe you smell you, honey" "I didn't fart I'm a lady" "The come over here, honey and smell it honey" By the way, these people call each other 'honey' in almost every sentence they address each other in. I didn't think they even had names, I thought they were just known as honey. I started wondering anyone's name was honey, and that just depressed me because I realized I would much rather be watching "A Brighter Summer Day" instead of this soulless peice of crap.

The effects are embarrasingly bad, full of CG blood, terrible mask on the demon girl and CG bats because I guess the spirit can do that. Yeah another quick thing I noticed was there didn't seem to be any rules to the dolls haunting. And you might think "Well of course, you don't know what she can do. She can do anything and that's what's creepy" But it starts to not make sense, and you wonder why this thing hasn't just taken over the world yet. She possesses someone at another house, which seems like it's out of her bounds since she only wants to haunt this couple.

One of the other dumb things in this film is that the doorknobs seem to be made out of styrophome as a couple weak hits from an umbrella can break one. On top of that, there's plenty of other nitpicky things that don't make sense, which I'll make fun of because it's fun to do. So our couple hears a noise in the house, and they go investigate. They get to the kitchen and find a broken glass on the floor and are releived for some reason? They say it must have been a mouse, as if a person can't break a glass? They then see one of their doors ajar and walk inside the room to see a window open. They think this is all just a coincidence. I especially like the scene where the woman is taking a bath, when her neighbor calls to ask if she's seen her missing child. The woman says "Okay, I'll help you find her, let me take a bath first" to which I laughed out loud. 'Look I know you have a missing child right now, but let me take a bath first alright?' Lastly is the scene in which the man's boss scolds him for creating unrest with the townspeople, for cutting down the dolls tree, and threatens to fire him. He says 'I was just following your orders' to which the boss replies 'Well sometimes you shouldn't always listen to orders' which I swear to God if my boss said that I would unleash a curse on him. Maybe I'm just upset because there are some shitty bosses who would pull something like that, but just that statement alone is enough to get my blood boiling.

Even the cinematography is just trying to hard to be showy, but comes of as annoying. The exposure is set pretty high, the camera will track a character but then lose them at parts; other scenes where the camera would zip around when it didn't need to, but the biggest crime of all is when the camera is showing something, it pans to the side, then it pans back only for something scary to be placed there and to make us go "Wha... How did that get there! I'm so scared!" Not to mention there's tons of slow motion scenes that I just laughed at the entire time.

The music was probably the most obnoxious part of this whole flick. The music itself was boring and uninspired by the music cues during the jump scares were so painfully overused. There's no way any sane person could have unironically used these jump scares and think it will effectively scare anyone.

There were no surprises, I literally predicted everything that would happen, even small moments just because of how much they'd remind me of a minor cliche, like a door closing behind someone. I literally cannot think of anything I like about this movie. Every aspect I think of was done poorly. Sometimes it's a movie that was done so stupidly it's funny, and that's the most I can give this film. Mr. Director, I'm sorry if you were actually passionate about this movie, but to me, it's so obviously trying to cash in on every popular American horror movies of the past twenty years. And not even the good ones. Avoid "The Doll" at all costs.