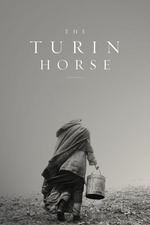 I swear dude, the horse is taller than the stable doorway but walks under anyway… I’ve watched this part ten times already… How does it walk under… I’m tripping out.

Hey kids, you know that famous incident with Friedrich Nietzsche in which he became delirious and tried to stop a cabbie from whipping a horse and spent the next nine years of life living in insanity? Haven’t you always wondered about the life of the horse? Don’t pretend like you haven’t wished that. Okay, so The Turin Horse isn’t necessarily about the horse, rather the man and his daughter who own it and follows their lives. That’s quite a stretch, but let’s see what the filmmaking master Bela Tarr can do with this idea. If you’re curious on my thoughts on Bela Tarr, check out my Satantango review since I wrote a lot about him there. In a nutshell, I like Tarr, but don’t love him. I love some of his films, and think he has impeccable talents but don’t personally get attached to his projects. I’ve seen five films from him and to put it bluntly, this just might be my least favorite of his films.

Let me get my positives out of the way: I did enjoy this film for the most part. Tarr’s masterful long take cinematography stands out again. In a 146 minute long film, the picture is only comprised of an astounding 30 takes! Undeniably amazing to watch, and it managed to have a presence about it’s eerie setting that mildly engaged me. However, despite the fact that the film kept me at helm, I didn’t find a whole lot else to grasp onto narratively or thematically.

There’s nothing original about the Turin Horse. I’ve mentioned before that an issue I have with Tarr is that his films feel like basic arthouse films. An uneventful setup of sad poor people coming to terms with nihilism and realizing how pointless life is. That’s been done in so many arthouse films before that the concept for The Turin Horse really didn’t strike me as anything special. It’s also hard to feel sad for them, when the characters are just kind of idiots. I mean haven’t they heard of a fork? Why do they eat steaming hot potatoes with their bare hands? At least wait for it to cool off. Come on Tarr, she used a utensil to snatch the potatoes out of the water? Lame, just have her put her bare hands in the boiling hot water.

My other problem and probably my biggest issue is just how it handles the themes of nihilism, or more specific Nietzschean philosophy. The message of this film seems to be “Life is meaningless, blah blah blah, existence is pain. These poor people have nothing to live for and they should just kill themselves” Okay maybe I exaggerated that a bit, but somewhere along those lines. I really hate that, because not only is it a shallow, hollow, unenlightening message, but it totally misses the point of what Nietzsche truly wrote about. On the surface that’s what nihilism is, but it is so much more than that, and I’d expect better from Tarr. Nietzsche is one of my favorite philosophers, not because he wrote endless books just stating how nihilistic everything is, he wrote about ways to overcome it. Yes, Nietzsche struggled with nihilism his whole life personally, and maybe Tarr was trying to capture that, but even then I don’t think he succeeded very well. But Nietzsche took the basic core of nihilism and used that to conjure up spiritual, uplifting, thought-provoking ideas. The ideals that if nothing matters, then the rules of society, or the rules of religion don’t matter; therefore you can choose your own path and you can live your own way. But that element seems to be clearly absent from this film, while it’s more focused on just depressing you through these characters wallowing existence. I’m shocked at how well Tarr seemed to understand the philosophy and exemplify it exceptionally in his masterpiece Satantango; such great characters all representing different parts of Nietzsche’s quest for the self. And it’s sad that many people came away from this, thinking it’s one of the great philosophical movies about Nihilism. I’m not trying to shame anybody who liked this, but I kindly suggest that you read some wisdom from Nietzsche and see for yourself what the master has to say about nihilism. Some have suggested that perhaps the film isn’t trying to attach itself to Nietzschean philosophy or nihilism but I strongly disagree. Mentioning the incident with the German philosopher at the beginning is a clear hint at trying to tackle Nietzsche’s ideas.

There are a couple incidents in which the film was trying to go deeper. The obvious one being the neighbor’s speech in which he seems to blame both man and God for the state of the world. Another scene that I took note of was when the two decide to leave their desolate home, only to return moments later. Perhaps this was a closer interpretation to Nietzsche’s views. Maybe our protagonists tried to leave this meaningless life and live for themselves, but find that they didn’t have the strength to, so returned to the only life they knew.

The Turin Horse can be depressing, it can be a pessimistic and hopeless film, I love those kind of movies; but it makes it out as if that’s what Nietzsche was all about and that’s a huge misunderstanding of his writings, especially from a director who constantly explores this theme. Take Jeanne Dielmann for instance, a movie that I love and despite not being about nihilism (falls more along the lines of existentialism and feminism) it’s a similar film in style and presentation. It’s just about a woman’s chores and daily routines, but after a while you start to notice things. You notice the differences in the little ticks of hers, you see her get lost as another street-walker in the town. I’ve only seen Jeanne Dielmann once, but it’s a film I would like to see again sometime as I believe there’s so much more to gain from it than, “a woman cleans her house and gets bored” with The Turin Horse, there isn’t much of a rewatchability to it. To me it’s literally just “Two people, do chores but life is meaningless so none of it matters” Also with Jeanne Dielmann, despite her being trapped in this cycle there is an upside that she can choose. She might not choose it, but she gets consequences for whatever her choice may be and that’s what should happen here. With The Turin Horse, the characters are stuck here, and learn that there’s no hope no matter what. Maybe when they leave the farm and come back it’s implying that there is no hope wherever they go, but if so that only supports the negatives I have with the film.

I understand that this film is more for the world that we’re involved in, but I wanted more of an exploration of that. It’s setting, characters, and narrative are all to serve it’s philosophy, which is fine, but like I’ve a hundred times already, doesn’t contain a whole lot of depth to it.

Despite appreciating a couple aspects of the film, I was underwhelmed by The Turin Horse quite a bit. The film has great cinematography and atmosphere, but lacks any kind of originality or greater thematic depth. A couple hints here and there at something greater but not much else to reflect upon after viewing. If anyone has any input on their interpretations of the film I’d love to discuss it and find out anything I might have missed. Honestly if the cinematography wasn’t this good, I would give it a lower rating. My rating may seem high for my complaints with the film, but I think it’s good overall, albeit not by much. See it for yourself or enlighten me with your thoughts on the film if you disagree.