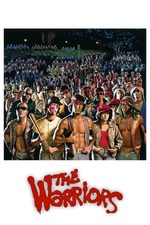 I don't hate fun. I don't even hate this movie. To sum it up best, The Warriors has a world in which I want to explore but characters I don't want to follow.

I just can't get invested in the action when I have no connection to these bland characters. The few that do have some development are soon forgotten about or left behind. Sorry, but I found it hard to care about their journey, when I know little about them, or how they're perceiving this conflict of theirs. Which by the way, these guys aren't even aware that they're caught in the middle of a conflict until much later in the film. At first they're just going home, and they don't even know that the murder of Cyrus was pinned on them.

I had a hard time understanding the villain's motivation. Why did he kill Cyrus, and even more, why did he pin it on The Warriors? Perhaps he had some grudge with them and was part of a rival gang, but there's never any indication of that. And his plan really wasn't that brilliant anyway. He just shouts that The Warriors did it and suddenly everybody believes him. Did no one in the crowd see anyone fire? It was only a matter of time before someone, maybe even The Warriors themselves said "Wait, no it was you"

Yes it did have some good action scenes and I like the costumes and the various themes of the gangs. It made the world feel more fleshed out and real with it's unique dress and get-up. However the characters are just so uninteresting which greatly took me out of the experience.

A lot of people love this movie, and that's fine. Keep enjoying it, and if you haven't seen it check it out. The villain and character motivations are incredibly weak, but it has a nice urban vibe to the setting and adventure. Once again it's a world I would like to explore, but characters I'm not interested in following.