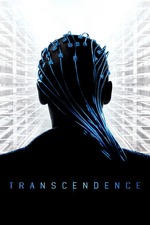 "He's not a monkey!" That's literally the only line I remember from this film, and I don't even think that's verbatim

For my fourth entry in my "Trek through the Unknown" series I watched Transcendence, so now I have to review it. Or I'd like to. See there's one problem. I can't review this, because I don't remember it. I just watched this movie a couple of days ago and I already forgot the whole film. And that's pretty rare even for a bad movie. I guess that should indicate how bad of a film this is, but let me try to recollect what happens:

So Johnny Depp is a scientist (I know, I'll get to that, but trust me that's not the stupidest part) he studies science and artificial intelligence with his wife Rebecca Hall. She's a scientist. And Morgan Freeman, he's a scientist, and Paul Bettany I think he's a scientist? He's in the beginning and then disappears for the rest of the movie. Wait was he the guy that got kidnapped? Anyway Johnny Depp is shot by an Anti-Technology terrorist group... led by Kate Mara. Mara's assassin is an idiot since he shoots himself in the head instead of Johnny Depp, but they just lace the bullet with poison so he dies in a few months, weeks, days, seconds. So his wife the scientist and his friend the maybe scientist hook up his consciousness to a computer. And then they go to some small town and set up a huge lab there. And then the Johnny Depp computer becomes too powerful... somehow... and they have to shut it down. He builds himself a physical body... somehow. And then they upload a virus that shuts down all technology in the world... Somehow! And the nerdy couple die at the end. Alright I remember Transcendence!... I remember Transcendence...

Where do I even begin with this train wreck? Well my first initial reaction is rather than this being a wreck, the film feels more like you're just watching a train sit motionless in the station. It's incredible how un-engaging this movie is. The pacing, the tone and the plot are so bad, not keeping any kind of momentum or suspension. I love sci-fi, and for every direction this film could have taken or idea it could have explored, there's a flaw within simple storytelling components. The music and the performances are more robotic than the A.I.; you never feel a sense of danger or urgency. For instance after the attacks on the different scientists, the characters all get together and discuss, but everyone treats it so normal, like they just came back from a picnic. It's a huge drop in the tone, the music doesn't help to build any kind of atmosphere, and our cast members seem so disinterested.

Speaking of disinterested cast members let's talk about them. After just watching him in Jim Jarmusch's incredible "Dead Man" he returns to my eyes, only to much it up in this. Johnny Depp is a scientist. Look, I think Depp is a great actor, despite what people may assume from his recent career. He's able to play strange characters, with a hint of dignity and heart bringing a unique and beloved style of performance to all. This role just isn't right for him. Maybe if the character was more of a quirky scientist, a mad genius, not only would that fit better, but it make for a much more compelling character than who we got. There's a part where A.I. Depp says something that I guess was supposed to be funny to this movie, and then his wife says:
Hall: He hasn't lost his sense of humor
Me: He had a sense of humor?
The film also stars Morgan Freeman the once great actor, but is now only in movies to say "hey, Morgan Freeman is in my movie" This isn't a bad cast, in fact these are great actors, but not one can deliver a lick of emotion to make you invested. The Wikipedia article was putting me to sleep.

After going through what happened I realized that not only is this film, boring, it's stupid. Example, The Anti-technology terrorist group. Just let that sink in, and now I'm going to tell you it's led by Kate Mara. Yeah, good-looking blonde teenagers named Bree hate technology. How is anyone so against technology that you make a terrorist group against it? So you don't use any technology whatsoever? You drive cars, and use guns, that's not technology to you? Wait, weren't you showing videos to each other of what was happening? Where'd you get those? Is some technology okay but some isn't? What is this group's motivation, why are they against technology? Why didn't that guy just kill William Blake immediately, then he wouldn't have had time to make an A.I. of himself. There many other odd things too that aren't presented well, which has something to do with the pacing I mentioned. For instance, at the beginning it keeps cutting between Depp's speech and some guy delivering a cake. Oh it turns out the cake is poison. Um, okay, but wasn't there a more suspenseful way of showing that? It's the first act, the audience is still trying to grasp the setting and characters, if you show some guy who we never see again delivering a cake, well then, you get a movie like this. There's another scene where Morgan Freeman visits the new lab and meets A.I. Depp for the first time. When he leaves he hands the wife a paper that says "Leave this place" Wait a minute why? Is he supposed to be a threat now? I know the plot wants us to think that, but nothing from the film indicated any sort of danger or diabolic intentions. Instead of filling us with mystery or dread, the characters just come out and say 'he's bad he has to be stopped'. He's bad because he cures people, and wants to save the planet and environment... Yeah, I don't know why he's evil, it's because he's technology I guess.

This brings me to my final section, the film is more confused than the audience in what it's trying to say. I think it's trying to say that technology is bad, but Johnny Depp's plan isn't evil, he's trying to help the Earth, unless I totally missed what his true intentions were. And then a virus shuts down ALL TECHNOLOGY IN THE WORLD... and happy ending right? Well then it shows the future, when there's no technology, and it looks like a run-down slum. Why is this good? I don't want to live here, I kind of do live here, I want to live in Johnny Depp's utopia! It's kind of like the verizon guy suddenly telling you to buy sprint, oh wait. Anyway then the maybe scientist says Johnny Depp did this the same reason he did everything, so he could be with her. Oh that's the point of the story. Love. Yeah, I'm real happy for you two, glad you can be together even though it was at the expanse of the very progressions of man and you effected just about every person on the planet, but at least you guys can be together. Even though your dead, so what does it even matter, but thanks a lot Johnny Depp. The movie felt like the creators thought of all different kinds of sci-fi themes and messages they wanted to have, that they didn't even know what they were saying by the end of this, and then chuck all that out the window with it's tacked on love-tale. Don't get me wrong, a film can be emotionally deep and thought-provoking at the same time, but this one felt like it wasn't sure what the hell it was doing from the beginning to the end.

I will compliment the cinematography... and that's it, and even then it's not enough to save this flop. Many called this one of the worst films of 2014, and I pretty much agree. Don't recommend it, "Transcendence" will not leave any kind of impact on you. You may even forget it like I did.