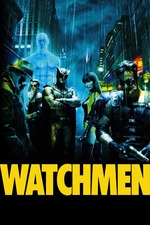 Oh yeah, I finally saw the film adaptation of "Watchmen" titled "Watchmen" and I guess I should talk about this divisive film. While it kept my interest steadily throughout the film, Watchmen feels more like a parody of the super hero genre without actually being funny... intentionally.

I think most of us are at least aware of the graphic novel in which the film is based on. All I can say is, if you haven't read it, I highly recommend you do so! Especially before seeing the film. I'm guilty of watching many films without ever having read the novels they were based on, but Watchmen the graphic novel is well worth your time! It's an excellent piece of literature that changed the art form of comic books and was highly acclaimed even to more literary scholars. Think of it as a great book, with images or think of it as a film, with it's strong visual techniques. I myself am not a big comic book guy, but I just knew that I had to check out this gritty new look at comic book heroes.

I've been longing for a dark twist on the super hero genre, against all these 'safe' 'accessible' Marvel films we've been getting. And Did Zack Snyder deliver? Well let's start with what I like. The story itself was good, and was almost frame by frame the exact same. Apparently Snyder even used the comic panels for storyboards. "We're too lazy to make up our own" But of course the story is going to be really good, especially when it follows the original note for note. Look at the source material and just try to screw that up! It's still part of the film however so the film scores quite a lot of points for that. There's... wait is that all I liked?...um... the acting was good. I mean maybe not excellent but they were fine... and the visuals... okay I should get to that.

While there was some great visuals, I'm kind of on the fence about them. Yes, it had vibrant palettes and immaculate angles, but at times was too dark and close up to see, and the world felt way too stylized in my opinion. Snyder's slow-mo-speed-up effects have been criticized to death and they are no less annoying here. Also I'm a big fan of great cinematography but I felt like the camerawork was too overbearing in this. Again, the world of Watchmen should feel like our own, or at least a slightly more realistic portrayal with some grit that most super hero media doesn't have. But the style took over way too much, I felt like I was in some bizarre world and I couldn't take the dark, brooding, parts seriously.

The soundtrack was just annoying and misused. For anyone who knows the soundtrack let me defend myself: I love these songs! This soundtrack of 60's folk practically aligns with my playlist! Bob Dylan, Simon and Garfunkel, Leonard Cohen, it's all their best work! However, a good song, doesn't automatically make any scene effective and can be used very wrongly. I couldn't help but feel Snyder was trying to push this sort of 60's protest and rebellion feel and just threw a dart on this genre and thought "Hey I guess that's kind of what this film is going for" I can not think of a worse placement for "I'm your bogeyman" in the scene where The Comedian is assaulting the protesters. I'm not saying this kind of format never works. Take Quentin Tarantino for example: Whether you love him or hate him, his films are very overblown, in many respects similar to "Watchmen" These stylized genre films and unique soundtracks make up this latter half of his filmography. But with something like "Inglorious Basterds" there's this atmosphere about it letting you know not to take it too seriously. It's just a bit of fun, and a mockery of history. But with "Watchmen" that's not the tone. It's supposed to be dark, rough, thought-provoking even! But when your characters are doing superhuman moves that don't exist on putty bad guys, in slow-mo to a disco song; it doesn't make me feel like this movie is going to start exploring the depths of nihilism and ethics.

And yes all the fighting scenes are stupid (I don't know where they learned these bizarre martial arts from) and I hate how Rorschach sounds like Batman.

I laughed my ass off when I saw Richard Nixon. This film actually had the nerve to put Richard Nixon in this movie! And as if that wasn't enough, they gave him a nose. A huge nose that made him look like a cartoon character in of those awful live action movies. No don't laugh you're supposed to be perturbed and perplexed!

My other issue is for a film that wants you to ask about the consequences yourself, it sure seems kind of biased in it's politics. Now don't get me wrong, I agree with this to some extent, but in the film it's so blatant. Need I mention Nixon the big-nosed human again? In the comic the politics mostly revolve around how the heroes have effected society and the groups of rioters and activists trying to get rid of them. Here, the film adds in the subplot of how the U.S. wants to use Dr. Manhattan as a nuclear weapon, and the U.S. is so bad and greedy, blah, blah, blah. And Yes, we are a greedy country, but the graphic novel made sure to explain how both sides reacted due to fear of the supers and made you understand. With the film however, it's just "No, this side is stupid and wrong, and this side is right!"

Also the pacing was a little rushed sometimes too. I don't blame the movie too much since it's already almost three hours long and has a lot to fit in, but I just felt like some of the scenes ended a little to quickly before we could emotionally take in what happened.

This was the dark, gritty, comic book story we all wanted on the big screen, but it let us down in that very aspect of the tone. For some critics, there are two parts of a film they look at, which applies most definitely to adaptations and those are the story, and the presentation. As far as story goes, "Watchmen" is pretty good but for presentation, it fails.