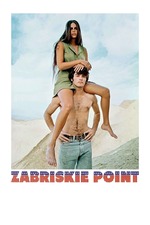 I've stated in my other reviews, that Antonioni is very hit or miss for me. Whatever he does I either love it or hate, and this movie is a prime example of just how I feel about the director overall. I think I'm getting a better understanding of Antonioni however, I've been trying to watch more from him, return to some of his past films I didn't care for, and have a slightly better taste in his style.

Anyway, this movie was sort of a mixed bag, every scene in this film I either loved or hated. Overall I guess I thought this film was okay, the only Antonioni film to be in the middle. Maybe that means I'm slowly moving toward loving Antonioni which I have no problem with. Unfortunately I still had some issues with this movie, but made for some incredible scenes, and at least left me on a high note with that powerful ending! (Don't worry I'll definitely get to that!)

I guess my major issues are a few nitpicks, but they just stuck out to me. Like how did he notice that a girl was driving the car from way up in a plane? This is the worst airport security ever. This guy just jumped in and took an expensive plane like he's playing GTA. Really nobody stopped him? Also we don't learn much about this guy's upbringing, but I seriously doubt he ever learned to fly a plane.

This movie was also funny. Intentionally and unintentionally. That scene with the fire hose flap had me laughing my guts out. I also liked when they painted the plane, that was pretty funny. Giving his name as Karl Marx was a nice touch. Oh and when the building exploded. That was hilarious! It just came out of nowhere! In a film that relies on minimalism and showing vaguely anything, I never thought I would see an explosion just pop out of the blue.

Antonioni's trademark of showing 'nothing' or seemingly unimportant scenes used to get on my nerves, but as I said I'm becoming more accepting of it. I was a little bothered by it in "Zabriskie Point", but after some revaluation, I think it suits this film very well too. A film like Red Desert uses the low scale to reflect the characters sadness, emptiness, and most of all, loneliness. This is probably the best trait I'm noticing about Antonioni, is that he's a master of showing isolation. We see characters do things, that don't make up a coherent plot, but very subtly build character. They wander through random daily things, that don't affect them, neither making them happy nor sad. It's almost a hopeless feeling like no one can comfort them, and nothing can cheer them up. The tone of his films are very stoic and unemotional, to represent how are characters are perceiving their lives. In "Zabriskie Point" the film deals with the concept of the youth. Many teens entering adulthood often wonder what their purpose is, what are they going to do with their lives, what's the point? Constantly searching and grasping, but finding Antonioni's favorite thing to shoot... nothing.

However, I still wouldn't say I was invested at the start of the film, and even after our two leads split ways I got bored again. We don't learn too much about our characters, one's an a college, hippie, activist and the other is... girl who... she's a secretary. So yeah, the style and pacing still didn't get me sucked in, but after thinking about it maybe I should watch it again with a better understanding. Also I rarely get into stories about "a young hippie who is misunderstood by society and tries to stand up against..." yada, yada, yada, if you like that stuff, then perfect. I couldn't get into it, especially when he tried to shoot a cop.

The best things were Antonioni's direction. Even in my least favorites of his, he skills manage to shine through. The magical and classic soundtrack was good, but sort of disappointed me. Most of the film didn't have music, despite their being a full soundtrack. But nonetheless the tunes were great! Escpecially... hang on one more thing. The love scene was excellent! I love the idea that these two lost souls meet each other for only a little bit, but fall in love and change each other's life. A little unrealistic, but still beautiful. That mystical music plays across beautiful imagery. That scene is the visual personification of love. And then other people start coming down into the desert to join them. There's a shot where it shows the whole area and it's covered with couples having sex. I laughed out loud at that.

But. The greatest thing of all, that this movie gave us, in so it wasn't a complete waste of time. Something to leave you ecstatic by. I wasn't going to make the review this long and I mainly wanted to talk about the ending. This is the GREATEST ENDING I'V EVER SEEN! After the building explodes it cuts to a surreal landscape of more things exploding and a Pink Floyd song starts playing. Pink Floyd song! Surreal imagery! things exploding! Awesome! It's like the whole movie just stopped to bring us a Pink Floyd music video! Even if I didn't like Pink Floyd as much as I do, I would still love it as long as it was a good song, but the fact it's Pink Floyd is just a bonus for me! This may not be the best in terms of a narrative coming to a close, as it was more of just the scene itself, but personally, on a purely entertainment way, this is the one of the greatest endings I've ever seen!

So if you're like me and you're a little bored by the movie, trust me, stay to the end, it's more than worth it!