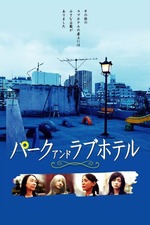 Being lonely itself does little harm when compared to being fettered by craving for warmth, companionship, escape from the mundanities and ultimately denial compounded together with the state of prolonged solitary. One of the immediate remedies that people seek of is to break the mundaneness from the customary life patterns, and the easiest way to do so is by inviting new or old strangers, whether deliberately or incidentally, into one’s orbit. Doing so invites a series of new possibilities that stems from actions towards oneself or strangers, and these actions itself can be seen as a challenge itself. One could harbour too much warmth or being cold and yet none of these actions are optimal towards any individual, they are marred by different idiosyncrasies by different individuals.

Here enters Tsuyako, a 59-year-old love hotel/rooftop park manager, her life consists of the same patterns. Sweeping the streets front of the entrance, reading familiar books while sitting idly in the receptionist counter, chase the patron of the park when the sun is setting, checking her mailbox and went to her private little space, rest and wait for another day to come. Her life breached when Mika checks out the place due to curiosity, when a precious notebook went missing and perhaps then, she decides to take the initiative to take the matter of the only customer of the love hotel to her own hands.

Asyl: Park and Love Hotel is one of the films that I’ve had very low expectation (thanks Supreme) and decided to read up on it rather than going into it blind. Two things perked up my attention, one being winner of best first feature in 2008 Berlin International Film Festival, the other being what I would consider a delectable word choice panopticon which somehow conjured the idea of the film being closed to The Tenants Downstairs (2016). Unfortunately, or maybe fortunately, it isn’t.

The movie itself is an unassuming, gentle indie drama about the interrelationship between the struggles these women have and their relationship between each other. Even though with its (inconsistent) usage of extreme close-up frequent enough, the movie approaches its characters with cold lens, doesn’t really divulge the audience of what it itself thinks of them and merely a more discreet viewpoint of such. The characters themselves are no doubt flawed, sense of curiosity and perhaps obligation that triumph privacy of others, fleeting moments of perhaps entertaining what lies beyond the sharp edge, bemusing behaviour that perhaps is just how they are in close proximity. Lots of perhaps and maybe, with the possibilities becoming captivating or kooky, or perhaps (maybe) both.

But beyond these main characters and their problems, the setting and atmosphere (and the kids!) itself are probably the most charming part than the sum of the movie. In the scene close to the opening tracking shot of Tsuyako travelling upwards to the park and the final scene of her carrying out her daily task dutifully was rife with the notion of living along with the eccentricities of the everyday visitors of the park.

The film itself could need more work, a little more polish. There are moments where it felt too slow and devoid of tension makes certain portion just plain boring. The resolution presented does seem optimistic but perhaps it’s the much-needed conclusion that people who are invested enough would want. I don’t mind either anyway.

Perhaps somewhere down the line the film itself will become a blurry mess in my mind but until then, Asyl is a great affecting watch for one quiet summer afternoon for me.

In the Name of God

The Second Life of Thieves