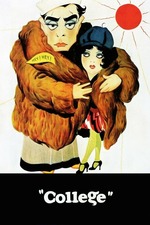 I'm having an increasingly hard time deciding who I prefer out of Charlie Chaplin and Buster Keaton, and College makes that decision even harder for me. Perhaps, however, there's no need to pick a favourite - they're different enough, both as directors and as performers, that comparison is pointless.

Roger Ebert pointed out that whereas Chaplin's Tramp was an outcast who seemed happy on the fringes of society, Keaton's alter ego was a loser who desperately craved acceptance. The desire to become a valued member of society is the theme of his film College, in which, after giving a high school graduation speech in which he vaunts the superiority of study over sports, he's dumped by his girlfriend who goes off to college, and is determined to win her back by taking up athletic pursuits. There are two problems with this: one is that the dean wants to use him as a role model for the college's intellectual prowess, and the other is that he's absolutely hopeless at sports.

Keaton strings together set-piece after set-piece, always striving to outdo himself. Most of the laughs come from the hero's utter ineptitude, such as when he tests himself at various track and field events only to fail completely, a sequence that gets a spectacular follow-up in the climax. Of course the blackface sequence prevents the film from having aged as gracefully as Sherlock Jr. or The General, and the direction isn't as inventive as in either of those films. But it's skilful and very funny all the same.