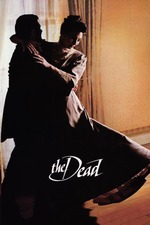 John Huston's The Dead is one of the most beautiful films I've ever seen. By that I don't mean that it has stunning cinematography, but that the way it visualises emotions and thoughts makes it stunning in a way that is almost completely unique in literary adaptations.

It probably helps that James Joyce's short story is one of the most moving pieces of fiction I've ever encountered. Huston's film, scripted by his son Tony, is devotedly faithful to Joyce's text, but this faithfulness is bolstered by their understanding that what matters isn't just staying true to the plot and the themes, but also - if not more importantly - staying true to the feeling and the tone. The story takes place on a 6 January party in early-20th century Dublin thrown by Kate and Julia Morkan, elderly sisters with a musical background. Their nephew Gabriel Conroy and his wife Gretta attend, and the lively evening passes without a hitch. It's when the couple leave the party that Gabriel has a quietly devastating realisation that changes his perspective on his own life.

The key in getting an adaptation of "The Dead" right is playing up the contrast between the party scene and the one that closes the story, in which Gretta tells Gabriel something that acts as the catalyst for his epiphany (clever of Joyce to set a story about an epiphany on Epiphany), and that's something Huston nails. All the way through the film is a feeling of larger-than-life emotion, as Huston and his extensive cast vivify the group of people gathered at the party and make us feel like we're celebrating with them, sharing in the atmosphere of joy and merriment. He betrays himself as a veteran of the literary adaptation by translating Joyce's descriptive passages - ones where Gabriel looks at his wife or has a certain thought, for instance - into visual passages that coax the audience into deciphering what is going through Gabriel's mind. When the film moves into its concluding scene, the emotion is only heightened, and it's only now that Tony Huston resorts to verbally lifting from the source material.

Donal McCann and Anjelica Huston are excellent in the leads and carry the film in its most expressive sequences. Their performances alone show just how little of their director's talent had dimmed as he entered his eighties. After four and a half decades of making some of the toughest, leanest films in Hollywood history, it must have been a welcome change of pace for John Huston to make his last directorial effort a work of exquisite delicacy. Thank goodness he did, because this easily ranks with his best.