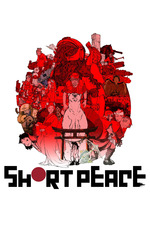 Short Peace is a 2013 anime anthology co-directed by Katsuhiro Otomo, creator of ‘Akira,’ 1995’s ‘Memories’, and a short film called ‘The Order to Stop Construction’ from a 1987 sci fi anthology called Neo Tokyo.

Like Neo Tokyo and Memories before it, Short Peace is intended to showcase the best talent in anime with Katsuhiro Otomo leading the way. First let me say that if you are reading this review with Pokemon, Dragonball Z or the kiddie anime you see on the Cartoon Network in mind then it may be hard to sell you on the fact that anime, at its best, is as--or more--aesthetically exciting than what you are accustomed to from Hollywood animated films. But if you come into these films with an open mind, you may find yourself pleasantly surprised.

The 1st short film is called Possessions, about a lone traveler who finds shelter from the rain in an empty shrine full of old forgotten keepsakes. The 2nd short film is called Combustible, about a boy and a girl who are separated by class but reunited when she accidentally sets her house on fire. The 3rd short film is called Gambo, about a monstrous white bear that defends a royal family against a demon. The 4th short film is called A Farewell to Arms, set in a post-apocalyptic landscape where a gung-ho combat unit packing the latest gear go up against an autonomous tank programmed to destroy everything it perceives as a threat.

The art styles of the 4 short films are distinct ranging from the look of a comic book to watercolors, each of quality that is so good that the 1st short film, Possessions, was nominated for Best Animated Short at the 86th Academy Awards. This is some of the best hand-drawn animation I’ve seen in recent years since the 2011 anime film Redline by Director Takeshi Koike.

Don’t get me wrong, there is some CGI in all of the films on Short Peace but so little that it blends seamlessly with the 2D animation. There have been past attempts to combine 3D with 2D animation. Here, I’m thinking of Shinji Aramaki’s 2004 feature-length film Appleseed and The Freedom Project, a 2006 seven part OVA commissioned and designed by Katsuhiro Otomo. These and other early 3D/2D hybrids, though promising in the level of detail they brought to elements such as mecha and weaponry designs, were simply awful in depicting characters. In recent years, though, the CGI in anime has gotten better and smoother especially in features such as those from Studio Ghibli’s Hayao Miyazaki and his latest feature The Wind Rises from 2014. With all fariness, though, Miyazaki’s film had a $30 million dollar budget which buys better talent beyond what most anime made outside the U.S can afford.

Anyway, the standout in Short Peace to me is ‘A Farewell to Arms’ by Director Hajime Katoki which was inspired by a book of the same name by Katsuhiro Otomo. I have Short Peace on DVD and it looks and sounds very good; it’s also on Blu Ray. This is one I pop in when I need a quick anime fix. Short Peace is a promising omen for the future of anime if they can only build on it.

Ghost in the Shell 2: Innocence