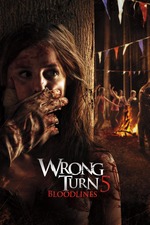 Back to mostly CGI splatter (except one decent scene which I guess is where they spent their effects budget) and back in the shit house.

This follows a group of college students on their way to a music festival set to start on Halloween... West Virginia’s Mountain Man Festival... which sounds a lot more promising than it ends up. It was a pretty tedious watch but it was better than 3.

Also, the music choices are just bizarre. There’s a scene where they have an electric version of Moonlight Sonata in the background and it just made me angry.

Not even Doug Bradley could save this.

Dammit. One more to go.