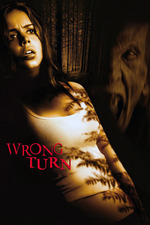 I decided to give the Wrong Turn series a rewatch in honor of the new one coming out next month. I believe I’ve only seen 1-3 but only really enjoyed 1 & 2. I own them all on blu ray so I guess it’s time to watch 4-6 as well.

I really can’t remember when I last visited this franchise and this first entry still holds up for me.

Something that stood out this watch is that you can really feel that it’s a product of the early 00’s with the wardrobe. From Kevin Zegers’s yellow tinted, wrap around sunglasses to Eliza Dushku’s low rise pinstriped pants being paired a tank top (A combo I unfortunately wore as well 😩) to Emmanuelle Chriqui’s pastel blue crop top and baggy white linen pants. Seriously, what a time for fashion.

Eliza Dushku is obviously great as the “tough but vulnerable” final girl and the best part of the film. I really didn’t care if anyone else lived, and actually found myself rooting for the mutants to kill off Carly because she was THE WORST.

I’m pretty excited for this series watch but I’m sure it’ll fade once I get to the third.