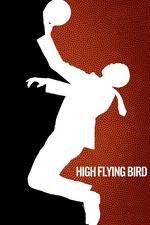 Steven Soderbergh’s name doesn’t appear on posters for his movies lately. It’s always “director of other films that you may have liked based on your Netflix viewing history.” That’s fitting, since he’s devolved into something of a generic, socially-conscious PSA content farm, which of course makes him an ideal piece of machinery for the Netflix mines. The problem when you decide that you’re going to teach society Important Lessons is that your work becomes boring and facile. Which is what High Flying Bird is.

As is becoming the algorithm-perfected formula, the film is juuuuust enough political content to provide a bland background flavor without truly offending white sensibilities, a clear point-by-point story, and enough A-listers to keep it from being actively shitty. André Holland has enough charm that his opening conversation with young NBA draft pick Erick Scott (Melvin Gregg) is captivating, as he dispenses wisdom to his charge. And he carries affairs along with Zazie Beetz and Sonja Sohn, all of whom are talented enough to imbue a soporific story with points of interest. I also appreciate the presence of Bill Duke, who continues his recent predilection for face-haunting films.

The story and the writing, however, are dreary. Half of the dialogue feels like it’s “hey Ray, remember that time you had a tragic cousin,” while the other half feels like “when’s that NBA lockout gonna end.” The only real chemistry between characters is between Mr. Holland and Ms. Sohn, which means that they’re the only ones that really get much memorable dialogue together. The other primary relationship, between Mr. Holland and Ms. Beetz, feels strangely perfunctory, and it’s hard to buy that there’s as much invested between the two as Mr. Soderbergh is trying to tell us.

Probably the most unfortunate part of this is that the story of black athletes seizing the means of production is one that ought to be told. But now we’ve got Mr. Soderbergh cockblocking that avenue by putting this tepid, strangely weak version of it out there. Three highly attended street ball events are apparently enough to crack a wall of billionaires and bend them to the will of their employees. Okay. And worst of all nothing is changed by that development except for the main characters climbing a rung in the existing power structure. The film ends on the promise of this moment being the beginning of something when it’s not sold as anything more than a feel-good manipulation of the holders of capital into getting a few operators a bigger chunk of the pie.

That’s what happens when you enlist present-day Soderbergh to tell your stories. It’s becoming a package of iPhones, the same exact city tracking shots from picture to picture, and just enough spice that your great aunt can consume it with a couple of glasses of water. Anyone with anything of import to say would be well-advised to steer clear.