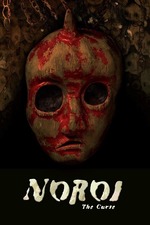 To enjoy horror is to accept as the price of admission a few more genre restrictions and well-worn tropes than the typical film. If you can get past the initial silliness of the found footage format, there's not a whole lot of barriers to enjoyment of Noroi: The Curse.

The stronger entries in the found footage canon tend to go lightly on the special effects and CGI, since embracing the cinéma vérité approach means that you're relying on human drama to carry your film. Kōji Shiraishi wisely opts to save his special effects budget for one particularly horrifying scene and a few dashes of spice to help flavor the overall narrative. The actors aren't really required to do a whole lot; Jin Muraki has to look increasingly nervous as the action develops, Marika Matsumoto plays herself playing the Japanese actress archetype that we're all familiar with from the judging panels on Iron Chef, Tomono Kuga has to look vaguely threatening. The exception is Satoru Jitsunashi, who plays the batshit insane Mr. Hori and helps ground the film by becoming a steadily less humorous figure as events go on.

The acting and the story are nothing remarkable, but the mood of the film is where Mr. Kōji excels. The viewer is kept constantly off-balance, the film being frequently intercut with clips of Japanese variety shows that are never readily relevant to the story when first introduced. The cartoon fonts and morning show cheerfulness keep getting rammed into the murky main plot, serving as delivery vehicles for disturbing new details and developments. And somehow, the manner in which this is filmed makes every interior space feel claustrophobic and threatening, giving the viewer an instinctive feeling that nowhere is safe, embodied most keenly by Mr. Hori's demented aluminum foil hovel. Every time someone knocks on a door in this film, nothing good happens.

Perhaps the most satisfying element of the film is its payoff, the climactic night-vision shot of Junko Ishii in the woods, swarmed with a crawling mass of blurry aborted fetuses. After an entire film where no monsters make an appearance, the sudden appearance of this shot as Mr. Kobayashi switches his camera on is a moment of genuine shock and revulsion that feels earned. The image serves as a nice mental calling card when recalling the film afterward.

They Shall Not Grow Old