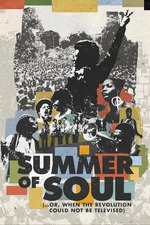 Over the past year I have both become obsessed with concert films, and have not been able to go to my favorite movie theater. So when I found out that the Jacob Burns Film Center would be showing Summer of Soul, I was elated. A new concert film with a stacked lineup being my return to the big screens and booming sound of the Burns? I was practically foaming at the mouth. Well, I guess I should've just watched this one on Hulu.

Summer of Soul (...or When the Revolution Could Not Be Televised) is one of the more disappointing film going experiences I've had in a long time. Granted, my expectations may have been unreasonably high, but how could they have not been? I remember a friend of mine telling me that Questlove was releasing archival footage of a Harlem musical festival from 1969, which triggered an onslaught of questions from yours truly: "How long? What's the lineup? Narration? Interviews? Added bullshit?". Not long after the trailer dropped and I was relieved to see that it was purely archival footage. No anachronistic talking heads or unnecessary narration, just performance. It seemed to me that it would play out like the rapturous Amazing Grace from 2018; never before seen footage left just as it had been originally shot.

Unfortunately, the minds behind Summer of Soul did not have the same respect for, or confidence in, the power of the archival. No, they instead opted for bullshit interviews that constantly interrupt music and footage to spew one audio-visual redundancy after another. It would be one thing to stitch the commentary between performances, but the beauty of the festival itself is always interrupted or cut short so that someone can say "Yeah I remember that, there were a lot of people", or "Yeah the lineup was beautiful because of its musical diversity". Next to nothing that is said in these interruptions adds to anything that isn't visually and sonically communicated through the original footage. If I'm going to see a concert film, let me see the concert. Don't beat me over the head with the glaringly obvious. There are some contemporaneous interviews, such as those regarding the moon landing, that I felt added an interesting context to the times and mindsets of the concertgoers, but much like everything that's great about the film, it was part of the original footage.

Which leads me to what is great about Summer of Soul: the actual concert footage. When it's not being destructively interrupted, all of the original concert footage is superb. The performances and the music are what you'd expect from the likes of The Staple Singers, Mahalia Jackson, Stevie, and Sly and the Family Stone. There are genuinely moving moments, and there would be more if not for the cowardice of the new filmmakers. Not only is the music great, but so is the audience. Much like many of the Pennebaker style concert films I love, it's not only a music doc, but a social doc too. Lightning in a bottle forever preserved on video tapes.

If the thesis of Questlove and Co was to shine a light on a criminally forgotten music festival that was lost to time because of racism and the zeitgeist-domineering Woodstock, then they not only miserably failed, but they've played a role in the same kind of historical effacing. In one of the interviews Lin Manuel Miranda says something along the lines of "Music is so great because it allows us to tell our stories". If only we as an audience were trusted to see that story fold out naturally and as intended. The irony is laughable.

Edit: wow this is my first review in a long time