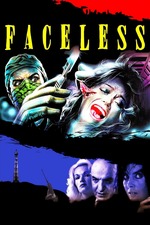 When Richard suggested we watch The Wax Mask because it opens on New Year's Eve [in Paris!], I suggested we follow it up with Faceless which opens at Christmas time in Paris [and ends with "Happy New Year!"], it also involves using living people for aesthetic projects.

Sadly, Faceless wasn't quite as good as I remembered and it's marred by that HIDEOUS song w/ the same title, by the end I was plugging my ears whenever it played.

Brigitte Lahaie made me laugh quite a bit and besides the [somewhat underused] special FX, she was the saving the grace, the focus on her always stealing jewelry from victims and using one woman's American Express card to go shopping was goofy & fun, as if it compares to stealing people's FACES, also cackled at the way she nonchalantly was like "that creepy caretaker guy was probably raping her, let's punish him with sex." Not because I find rape fun, obviously, it was just absolutely absurd.