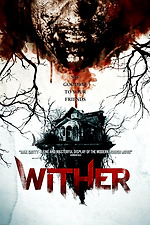 What's the difference between the Swedish Evil Dead-inspired, cabin in the woods, horror film and the Evil Dead remake which was also released a year later in 2013? Well, that's easy, Wither was actually pretty decent.

When you take into consideration that Evil Dead (2013) cost about $17 million to be made and Wither had a budget that didn't exceed $50 thousand, you have to wonder what that disgustingly large amount of money was spent on to make a vastly inferior film.

Wither didn't have an original plot nor did it present us with fleshed out characters, but it proudly displayed outstanding practical effects and made the best film they could with what they had and that has to count for something.