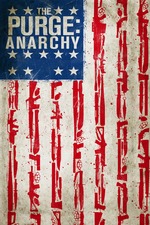 If it weren't for the endless parade of dumb violence it might be easier to take the heavy-handed political commentary about the cleansing nature of Bread & Circuses violence and class warfare.

The Frank Castle, er, um, I mean Frank Grillo character, is a blank nothing that is not up to the task of the core protagonist holding the film together. While he was perhaps necessary to serve as a plot device to explain how a waitress and daughter manage to survive the night, the working-class characters, which at least have some narrative potential, are unfortunately relegated to the backseat as soon as the one-dimensional vigilante comes into their lives. The result is a chain of boring scenes of mayhem strung together by brief respites that serve as the set-up of the next predictable "twist" that ignites the Hollywood blood-letting once again.

You can get the same tripe from 1987's Running Man, except that the Schwarzenegger popcorn flick doesn't take itself half as seriously or think it is smarter than it is. No amount of overwrought pseudo-political exposition can make up for the fact that its real purpose is to titillate the audience with 'cool kills'.