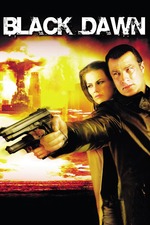 Steven Seagal is a top top top undercover agent who has to save mankind from getting blown up by terrorists...
I wish Seagal could break some limbs of those confusing me with DVD titles. My DVD was called THE FOREIGNER which is also a Steven Seagal film but this was actually BLACK DAWN. Seagal was even called a Foreigner in this movie!!! The synopsis on my DVD was also totally different from what I saw in the move!! What's up with this confusion bullshit?!
So, anyway BLACK DAWN clearly marked Seagal's second career as a DTVler who simply doesn't give a shit about anything anymore.
Clue #1: We start in some Eastern European country.
Clue #2: Seagal's car is full of McDonalds stuff not hiding how he's become such a large gentleman
Clue #3: Seagal's hair piece looks like shit
Clue #4: Seagal wears a suit (!) with a golden tie (!!!)
Clue #5: Seagal has a hard time catching up with some medics slowly rushing someone to their ambulance
Clue #6: Seagal has become quite a large gentleman (see #2)
Clue #7: Seagal can't fight shit anymore, they don't even bother to edit in his face during 'his' fight scenes
Clue #8: Seagal has become more of a background character
Clue #9: Bad guys are mostly of Eastern European origin
So, what we're left with are
a) his voice
b) his super super secret past
c) somebody telling somebody how badass he is.
I can see how Seagal's DTV stuff has received such horrible imdb ratings. Still, it's Steven Seagal in this movie and we haven't reached the point yet where they just CGI his face into a couple of scenes. Not yet.
So, BLACK DAWN isn't super great as you might have guessed by now but it's also not terribly bad. The plot is more confusing than exciting but the pacing is decent and the few action scenes (mostly gun play to pay tribute to Seagal's McDonalds consumption) aren't ruined by someone who thought he'd make a MATRIX movie like in HALF PAST DEAD.
The bad guys become less and less interesting (probably to pay tribute to Seagal's not giving a shit face), so all we're left with here are a Waingro impersonator and poor man's Karl Urban.
The REAL highlight is the Steven Seagal interview on the disc. He grants us a couple of minutes of his time sitting on his throne (I shit you not, it's a proper throne!) in his Buddha-outfit and talks some bullshit about him inspiring his fans to contemplate and stuff. It's amazing. He's the Greatest. That's what he thinks at least.
So, now I gotta get to THE FOREIGNER as I wanted to watch his movie in chronological order... I wonder under which title I might find that one. If I ever find it at all.

Make or Break Scene: The warehouse fight scene. So badly edited that I only realized after the fight was over that it was supposed to be Seagal who did it.

MVT: Yeah, well... still Seagal which says a lot about the quality of this film.