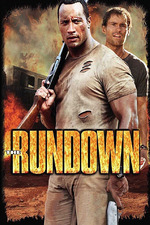 The Jock gets assigned to find Stifler by his dad and goes to the jungle where he meets Christopher Walken who runs a gold digger outfit and is the bad guy here...
I don't know what's worse. Being stuck in the jungle with Stifler or Rosario Dawson? This is even worse: we are being stuck in the jungle with both of them!!! Pretty much my worst cinematic nightmare but I was surprised how tolerable The Jock was. Which doesn't mean I ever need to watch another movie with him. Ever.
So, THE RUNDOWN is basically KINDERGARTEN JOCK. The Jock has to 'team up' with Stifler in the jungle which leads to many 'funny' situations like Stifler not being able to get his dick out to pee (which is ridiculous if your name is Stifler).
Even worse: the Jock just wouldn't keep his mouth shut about doing a PG movie here. No guns. Absolutely no guns! Even with everybody shooting at him. He just resorts to his wrestling stuff and Peter Berg's shitty 'stylish' (slow mo - zoom - slow mo) direction. Spoiler! In the end he actually does shoot some guns but this doesn't make this not being KINDERGARTEN JOCK.
So the whole movie is (literally) just a cartoon which tries to do the whole buddy adventure movie routine and fails miserably: no chemistry, no comedic timing, the broadest 'comedy' culminating in CGI-face-mutations and babbling at some monkeys. If you find it funny Stifler impersonating monkeys you are in for a treat here though.
At some point I was so happy hearing about Rosario Dawson being captured by Walken who would torture her ugly ass. That would have made for an awesome ending but no, we don't get that and poor Chris Walken gets defeated by The Jock after all.
Chris Walken is pretty entertaining in this even with some awful lines he was forced to say but just watching him sweating his ass off in the jungle sporting a nice wife-beater and beer belly was pretty great.
What REALLY would have been great: if they had cast Steven Seagal in The Jock's role and made The Jock his sidekick. That would have been an AMAZING action film.
Like this it's just KINDERGARTEN JOCK with some INDIANA JOCK thrown in in the middle.

The Killer Is One of Thirteen