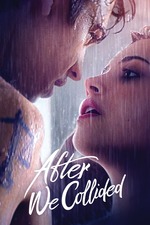 So, one year ago I went to watch the first movie of this series with my crush and it went pretty well (we held hands BOYYYYYY)

One year later and she's still my crush so I decided to make a surprise and buy the tickets to the sequel! She absolutely loved the first one, that's why I gave it a 1.5 star rating (which turned into a 0.5 on a rewatch), so of course she thanked me and wanted to go!

I was on the train earlier today and I received this DM from her: "Hey 💛, you mind if I bring my friend with us?"
Ok, I'm a nice person so of course I said yes and because of Covid, there would be another seat next to us but I was still pretty sad because it would be more difficult to me to finally tell her how I actually feel about our relationship....

SHE BROUGHT HER BOYFRIEND! A FREAKING SECRET BOYFRIEND!!!! I WAS SO MAD

the movie was really bad, but better than the first one (even though it will probably be a 0.5 on a rewatch)
I tried to enjoy the film but it was not easy when you're seated next to your crush (not my crush anymore bitch) while she is almost eating another human being