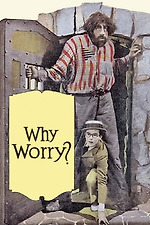 This time around, Harold Lloyd plays against his everyman type, and portrays an obtuse hypochondriac millionaire on a rather adventurous holiday. While he starts off as a pompous fool, Harold quickly grows into the man we all know and love - wily, courageous, charming, and acrobatic. Lord knows that Lloyd has pulled off a lot of hair-raising stunts, and just when I thought I've seen them all, he unloads a whole new arsenal of jaw-dropping feats involving the lovable 7'2" John Aasen. While Why Worry? isn't necessarily politically correct, it's still easily one of my favorite Lloyd films.