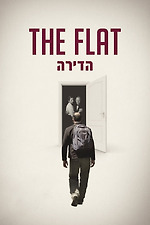 I've always wondered if documentaries like this are somewhat staged, or if they just get lucky. Like the one about former wrestler Bret Hart. It just so happened a camera crew was following him around in the time before the Montreal Screwjob? And since that's wrestling, you have to be suspicious.

In The Flat, I'll take Arnon Goldfinger at his word and assume this is legit. His 98 year old grandmother has just died. He, his mother, and several cousins clean out her apartment in Tel Aviv. She'd lived there for over 70 years. While going through papers, Goldfinger discovers correspondence between his grandparents and a German couple named the von Mildensteins. As his grandparents were from Germany, this would not be unusual. However, in his research, he discovers that Leopold von Mildenstein was a high ranking Nazi officer. And since his grandparents were Jewish, that naturally piques his curiosity.

Arnon finds out that his grandparents were somewhat famous in certain circles, and had been mentioned in books and newspaper articles. The film actually becomes somewhat of a chronicle of both families, as Arnon brings his mother to meet Frau von Mildenstein. It's actually kind of interesting how little these children know about their parents. Did she know her parents were friends with Nazis? Did Frau von M know that her father preceded Adolph Eichmann in the SS?

It's a fascinating story on a personal scale. There are no "grand declarations" here. It's not about the Holocaust. It's about one man's search for information on his grandparents, something that no one in his family is really aware of.

It's not a great film, and there really isn't enough of a story here to stretch 100 minutes. This would have been a good 90 minute TV special. It reminds me a bit of "Who Do You Think You Are" and shows like that. It's well done and enjoyable on a small scale, but it's a bit depressing, especially the last 30 minutes. It's not as good as My Architect, and it doesn't pack the emotional punch of Paper Clips or Forgiving Dr. Mengele, but it's certainly worth your time if you like these sort of things.

Note: Apparently, this leaves Netflix Streaming in the next day or two. So, if you wanna watch it, do it now.