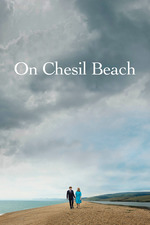 Florence Pointing and Edward Mayhew, a couple of two young British lovers, found them selves in a seaside hotel at the start of their honeymoon. Although neither want to admit as much, they are preparing for their first time having sex together.

The book was written by Ian McEwan, as well as the screenplay for the film. McEwan was actually born in 1948, while the film takes place in the early 60's. And in this book he touches an underrated topic, in literature, film, and just the media in general. Asexuality or Sex repulsion.

The film goes back and forward, we found this two in their honeymoon but little by little we are shown the vital moments of their relationship, and everything that lead to this especial night that is going to change both of this characters lives forever. At the beginning we have a really awkward Edward and a nervous, fragile, Florence, both finding their ways to have intercourse with one another, without really having any type of conversation about the subject before. They look like they barely know each other, its uncomfortable and feels wrong, especially for the young Florence, who seems to be repulsed by the idea of making love to her new husband. When the film gets to awkward it takes us back to the past, and shows us a life when sex wasn't involve. A non sex life. The first time they met, their first kiss, first time they met their parents, etcetera, you can easily tell these two young lovers are madly in love with each other, but maybe not madly in love with the idea of sex, or at least, on of them isn't.

I think this film is underrated for many reason, but one being the: not talked about enough topic of, Asexuality. Its so hard these days to find good representations in cinema about the Lgbtq+ community, but its easier to stumble upon Carol (2015), Call Me By Your Name (2017), Brokeback Mountain (2005) and more famous and Academy Award nominees, these films that represent the gay community exquisitely, but to be honest, finding a good representation of Trans community is hard, especially a good accurate one, and even harder is finding Asexuality. I don't find myself represented in the Asexuality spectrum, I don't consider myself an Asexual person, but growing up, the term really scared me: What if I was Asexual? Is that bad? I grew up thinking it was, because of the lack of talk surrounding this "controversial" topic. So I think Ian McEwan, who himself is not Asexual, did a fantastic job dealing with this term in the most delicate and real way possible.

I read the book, and loved it. It was tender, sweet but it got raw and harsh really fast. The movie has the same vibe that the book has. It can be beautiful at moments, but then it gets awkward and uncomfortable, just the way Florence felt when it came to their relationship. I love the way we got to really meet this characters and put our selves in both of their shoes. Florence, a beautiful violinst, who doesn't know how to handle the fact that she feels so repulse by the idea of being touched by her husband, or having him penetrate her. And then Edward, who seems to be tired of waiting, and thrilled to finally make love to the women he loves. Both sides find have different definitions for the world "Sex"

There were few differences between the two hundred page book, and the two hour long film. But there were little, insignificant, and didn't bother me, as someone who really enjoyed her time reading it.

Both Billy Howle and Saiorse Ronan, gave fantastic performances as Florence and Edward. And with a beautiful cinematography, directed by Dominic Cooke. I think this film is underated, and I highly recommend it, as an experiences. Is beautiful at times, is awkward, and it can leave you even with a couple of tears in your face. I really enjoyed it, and I fully recommend On Chesil Beach.