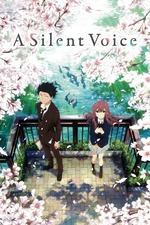 I really hated Ishida. You're supposed to, obviously. He bullies Nishimiya for no reason other than her deafness. He would have bullied her regardless, just because she was new to the class. He is the ringleader and the enabler for his friends to bully her too.

Cut to years later and something has changed. He's distanced himself from who he used to be. Ostracised by his friends and filled with self-loathing, he's meek where he used to be brash.

A story of seeking redemption it may be, but it does an amazing job of separating self-worth from the opinion of those around you. Being accepted socially means little if you go home and cry at night. You can find no flaws in yourself and still want to die. You can quantifiably become a better person and have it all shaken by those who love you at your worst.

Having said all that, A Silent Voice's melodrama keeps the laughs coming between the tears. Nagatsuka is so colourful, so passionate, and funnier than anyone can prepare you for. Moments of unreserved truths get lost in translation for Office-like cringe humour. It has so much heart.

Ishida and Nishimiya are at the centre of the tale, but it's an ensemble piece through and through. Yuzuru embodies selflessness, putting herself before others to a fault. Sahara is gentle and warm, but easily spooked. Kawai is loud and lacks self-awareness. Ueno is a constant source of friction, and it's not hard to imagine she's living her own film off-camera and we're intersecting with it.

Nishimiya is endlessly submissive on the surface. Her response to problems is a signed apology, regardless of her own involvement. She isn't passive though. Her sorry after sorry after sorry is down to the same problems Ishida, and everyone else, has - she knows she's a burden. Her presence is too much for her friends, her family, herself. Nishimiya is a mirror to Ishida in ways, but Ishida is a mirror to the viewer.

It's a pensive film. I couldn't quite believe how much of myself I saw in a number of characters, and I have to imagine that's a universal reaction. It's jolly and light-hearted, and it's heavy and emotional too. It has ups and downs. On the journey towards being the best person you can be there'll be pit-stops where you take a few steps back. That baggage travels forward with you. A Silent Voice is about when the weight becomes too much, and who'll be there to carry it with you, and who'll be first in line to watch you shatter.