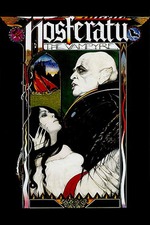 upon rewatching on the big screen with a fairly strong edible kicking in, i have concluded that this is the ultimate anti-vampire film. the film’s opening sequences showcases the decomposed corpses of what looks like dead children, and immediately submerges us into the dreary landscape that follows a decrepit vampire whose eternal existence is nothing but boredom and pain. not much happens in the film, but to me that’s the point. what more is there left to experience after a lifetime? gone are the horny, sexy vampires who seduce innocent women and live lavishly in grand castles; herzog’s nosferatu is a lonely, hideous beast who lives in a dirty, plain tomb that is far away from civilization, and wants nothing more than to die like a human. the film shows us not a beast, but a sad man. i was taken aback at how much nosferatu is humanized, and the counter of adjani presented as a dark angel was just as effective. a surprisingly depressing but raw portrayal of such an iconic cinematic monster.