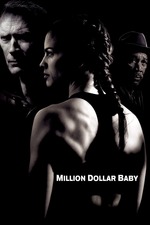 Here's one the saddest stories in the sports cinema ever made...

I thought that this film would be as Rocky franchise but fortunately wasn't nothing at all.
At this time the lead character is a woman, giving to this film a feminist vision, thing what was too good.

A film plenty of magical performances and an outstanding work by Eastwood good could be one the greatest film in this genre.
Despite of that I prefer Raging Bull but this movie is incredible.

Hilary Swank really was the soul of this film, being helped by two legends of the cinema, Morgan Freeman and Easwood.

In addiction this movie counts with a fantastic plot by the hand of Clint Eastwood who won an Academy Awards making again history in cinema world.

Representing the hard work, the dedication, and self-improvement is perfect for increase your motivation.
Otherwise and at the same time this film is going becoming in a depressive way how the pain and the injustice mess up your own life...

Anyway a film so well done, but maybe you shouldn't watch if you're kinda sad or something.
Really worth to watch it due that the actors can't be better, the plot is wonderful, and some fantastic scenes.

-Added to my (List) Academy Awards For Best Picture✅