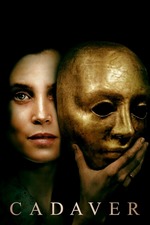 What looked like a promising Norwegian horror film ended up being rather disappointing. The most frustrating thing is that the concept and location are really cool! This could have been a very creepy, post-apocalyptic thriller, but unfortunately it involves the most ridiculous characters who make infuriating decisions and mistakes at every step. They're invited to a "dinner and a show" event where they serve meat in a starving world, and they don't really question this. They're told to keep masks on, and they keep taking them off every two minutes. Their kid takes off regularly and has no concept of sticking with her parents in a world that's clearly VERY dangerous. And that's just the beginning. How did these people even survive the apocalypse for this long to begin with?! Because it's clearly been going on for a while.

Give this one a pass. However, if the idea of post-apocalyptic world mixed with a traveling theatre sounds like an interesting combination - do yourself a favor and read (or listen to) "Station Eleven" by Emily St. John Mandel. It's not a horror novel, but it has its tense moments, and more importantly it's a fantastic post-apocalyptic story.