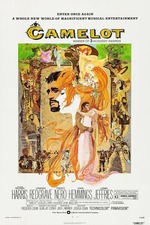 Phoebe's review left me questioning a lot of things about myself, like why I hadn’t thought of watching this even though I love the cast recording of the original Broadway musical with Richard Burton, Julie Andrews, and Robert Goulet.

But wow, what a simply magnificent and visually delectable film! There are mammoth sets and sumptuous costumes, all with oodles of texture. Apparently the wedding scene was only lit by the thousands of candles? It’s all very artistic and extravagant, and there’s wonderful imagery throughout, such as when Lancelot and Guenevere consider ending their doomed affair while singing If Ever I Would Leave You in a giant bird cage. (I think I love every song in this musical, but that’s my absolute favorite.) And the overall comic tone of the whole story is so very deftly handled. Richard Harris, Vanessa Redgrave, and Franco Nero all give flawless performances. This is was truly a feast of a film and I’m obsessed!