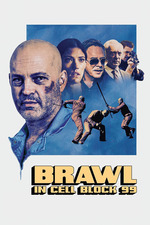 Unbridled, bundled, conserved rage and the art of unleashing it precisely when the impact, which is equivalent to an atomic bomb impact, contains only minimal collateral damage. Unfortunately they are then in the wrong place at the wrong time.

Vince Vaughn, the giant Vince Vaughn, who has been practically miscast in countless comedies (or the Psycho remake) for more than 20 years, is finally discovered. By S. Craig Zahler, who already with "Bone Tomahawk" left first, but deep traces.

"Brawl in Cell Block 99" is angry, unrestrained genre cinema on the border of Grindhouse and honest character study, which only works like this in this mixture. Without the necessary substructure, this would be a single gore show, in which the German age rating agency once again vetoed its once dreaded for a felt eternity. Between shattered bones, heads that have been kicked to must-see or faces peeled off on the floor this movie actually tells a real, from the beginning to the end coherent and in its consequence incredibly straightforward story of a self-tamed tyrant, who has learned to live with his destructive power. Not to use it when ordinary people might do so. Then, when he's fired without guilt. Then when he's provoked by a bunch of rednecks at a stoplight. When his garbage can is spread across the lawn. Not even when he exposes his wife cheating on him. All it takes is her car getting hit. Dismantled with his bare hands. Hinting at what he's capable of. And what he - after his successful withdrawal - keeps in check self-disciplined, thoughtful and morally sound. If it has to come out, I'd rather it be channeled into inanimate matter. Even imprisonment at the most inconvenient time does not let him break with his principles and (apparently indispensable) self-disciplinary measures. Even though he will see his unborn daughter only at her school enrolment, he will be locked up like an animal and face endless provocations from outside. He lets it get to him, meets it at most with bone-dry cynicism on the border of gallows humor. Until a fatal chain of circumstances virtually forces him to let the beast run amok. And now: Run for your lives!

"Brawl in Cell Block 99" works so phenomenally despite its unrestrained portrayal of violence and the story, which is simple on paper, because it combines both in a coherent and mutually supportive context. The protagonist's later savage vendetta seems - frighteningly - justified, even in this radical form. It is only through this investment in the framework conditions that S. Craig Zahler is able to sell such a raging monster like this with half a degree of integrity, which is the true art of the whole. The shifted, crushed, smudged understanding of justice of the spectator, it is put to a truncated test. And the Winner is: S. Craig Zahler. How he manages this makes him a great filmmaker.