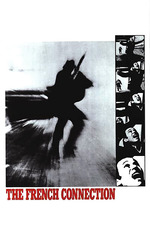 Watched on Blu-Ray (borrowed from Dad)

Even the prelude to William Friedkin's thriller masterpiece "The French Connection" is of a surgically precise and yet immensely disorienting aura, in which the perspective seems at no point to be clearly fixed. The story of the film begins in Marseille, where a man, who is apparently an undercover policeman on duty, shadows a small gang of criminals. The fact that the leader of the gangsters is Alain Charnier, who heads the biggest heroin syndicate in the world, is only revealed as the plot progresses. In the beginning it is only people and their actions that Friedkin observes in concentrated shots. "The French Connection" consists of the constant interplay of observing and being observed, in which the nameless policeman is first shown as a mute hunter. From a safe distance, he carefully keeps his alleged prey in sight, buys various kinds of food in the course of his cover, such as a slice of pizza or a baguette, and a little later walks through the labyrinthine alleys of the picturesque port city. But already in these scenes, the viewer immediately becomes suspicious. Owen Roizman's brilliant camera has apparently long since degenerated into a threatening observer, chasing the supposed hunter until there is no escape for him.

One shot later, which seems like a brutal wake-up call, the setting of Friedkin's film changes to Brooklyn, where Jimmy "Popeye" Doyle and Buddy "Cloudy" Russo, two policemen from the New York City Narcotics Department, get on the trail of an explosive case. It will involve a large amount of heroin, which has a high purity of 89 percent, and is believed to change hands between two gangsters. Once again it is about the same Alain Charnier, who was introduced in the prologue of the film as an almost overpowering authority on the playing field of criminal machinations.

The actual criminal plot, which is based on a successful novel by Robin Moore, who again took a real case as a model, soon moves to the edge of the events in "The French Connection". For the rather simple plot, Friedkin and scriptwriter Ernest Tidyman reduce dialogues to the bare essentials and spread out significant developments mainly through visual imagery. The cat-and-mouse game between the policeman duo Popeye and Cloudy and the criminals is staged by the director as a multi-layered grey area in which the boundaries between good and evil become increasingly blurred. Even though Popeye is actually on the side of the law, he is early on portrayed in the film as a morally quite reprehensible character, who attracts attention through racist remarks, uses brute force to gain access to important information and generally appears like a person who is constantly under the influence of electricity, where the next outburst of rage could be only seconds away. Quite uncomfortable to follow and feel sympathy for such a person during these days.

Friedkin only sparsely illuminates the background of the characters when he shows Popeye, played brilliantly by Gene Hackman, in a short scene in his apartment, for example, merely as a hung-over wreck that was handcuffed to the bed by an attractive, presumably paid woman with her own handcuffs. In addition to this brief digression into the policeman's private life, Popeye is portrayed above all as a driven professional man, who attaches himself to a case at all costs, since he has obviously been caught far too deeply in the cycle of mutual observation and being observed, which Friedkin establishes as the central narrative rhythm from the very beginning.

The setting New York, optically comparable to the cool noir fantasies of a Jean-Pierre Melville, degenerates into a pale juggernaut between constant sunrise and sunset, in which the fragmentarily arranged sequences of cuts create a unique mood of threatening paranoia and at the same time disconcerting forlornness. Friedkin, however, constantly pulls the viewer out of this beguiling daydream of the ever more senseless cat and mouse game with feverishly captivating peaks of tension when a chase on foot in a subway station becomes a splendid ballet of tricks and deceptions, while a later breathless chase, in which Popeye races after an elevated train in a car, is staged in such a stirring and spectacular way that film history has been unable to produce anything comparable to it to date.

In the end, "The French Connection" is a work in which all the obsessive efforts of the protagonist, who has already lost a colleague on his last mission and once again has at least one human victim to answer for, lead radically into the void. In a grandiose montage, Friedkin shows beforehand in the film how Popeye stands on a street opposite a restaurant and shadows the criminals who are having the finest food brought to them inside, while the policeman has to make do with a bad-tasting hot drink which he pours onto the street with openly displayed aversion.

At the very end Friedkin's movie has one last shot outside the picture. It leads, as well as the investigation itself, to nowhere.