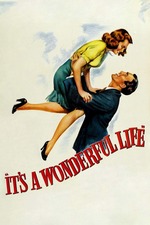 "A toast to my big brother George: The richest man in town."

Every year around the festive season I rewatch It's a Wonderful Life and every time it manages to take me on an emotional journey that has my eyes watery during most of the latter half until tears to fully flow when witnessing that incredibly moving ending.

So much has been written about it that I'm not going to even bother reviewing it. All I will say is that it is a gift, and a gift that everyone deserves the opportunity to cherish because this film, in my eyes, perfectly shows the value of life and has the ability to instil even the most pessimistic of individuals with hope.

A classic that more than lives up to its status and a film that deserves a spot in my top 30 of all-time. Timeless with its themes of personal sacrifice, love and loyalty alongside being deeply resonant to this very day with its criticisms of commercialism, this film will never, ever age.

We'll drink a cup of kindness yet for Auld Lang Syne :')