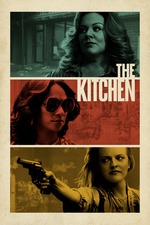 We are living in a golden age of mediocre Scorsese ripoffs, folks. We have JOKER stair-dance it’s way to a Golden Lion award at Cannes, to John Travolta murmuring in accents in GOTTI, and to HUSTLERS, which still reigns as “better than expected”. But now we have THE KITCHEN, a biteless, pandering, and sloppy excuse of a mob picture that wastes its talented cast and sprawling potential. Based on the comic books and brought to the screen by debut director Andrea Berloff, THE KITCHEN reeks of cable-tv production design, script and dialogue straight out of a cartoon, and moral ambiguity that’s a far as possible from moral or ambiguous. It honestly takes stones to fuck up a movie this hard.

The story centers around the wives of three mob criminals who get arrested after a flopped robbery at a convenience store in Hell’s Kitchen. Kathy Brennan (Melissa McCarthy) lives with two kids under excruciating debt, Ruby O’Carroll (Tiffany Haddish) gets scrutinized by her racist in-laws, and Claire Walsh (Elizabeth “What The Hell Youre Better Than This” Moss) is a mousy introvert constantly abused by her husband. Together, they form a team to take over their husbands business with the Irish Mob, which conjures heat against new Mob head Jackie, who we know is the bad guy thanks to the mobs insistence that they’re sexist pigs. The three gals took hold of the mob in under a hilariously short amount of time, but it won’t be long before a few unexpected foes get one step ahead of them.

As I was watching this movie, I kept remembering the criticisms against HUSTLERS for “making excuses for their protagonists” because this movie is exactly that but twofold. Instead of exposing the gritty, subtly twisted morality of our protagonists, the movie insists that they’re actions are meant to be this “pro-feminist” call to arms. The script makes these characters terribly one-note and blunt and even the slight sight of growth looks unintentionally hilarious. Claire, for instance, is all noble suffering until the film suddenly grants her a gun and a thirst for blood, a change of character that not even Moss can pull off right.

There’s no grace or consistency to this movie. Every scene looks to be hacked up to pieces in the editing room, the music cues get annoying and tonally off, the story fares little more than poorly structured gangster cliches, and the overall atmosphere of 1970s Hell’s Kitchen looks so unimpressive it might as well be an episode of DAREDEVIL. I usually hate giving movies this negative of a review, but I could not remember a time a movie this simple can still fumble the bag.