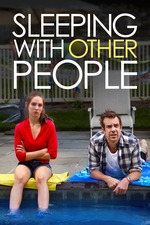 Twelve (or so) years after losing their virginities to one another in college, Jake (Jason Sudeikis) and Lainey (Alison Brie) reconnect at a meeting for sex addiction. From there they decide not to ruin things by sleeping together and instead grow closer as they attempt to keep their relationship platonic.

There are plenty of rom-com tropes to be had in this movie, including the expected, albeit frustrating, conversation to discuss whether or not men and woman can just be friends. Thankfully a strong, witty script from Headland, and incredible chemistry between Sudeikis and Brie keeps Sleeping With Other People afloat amidst some of the more formulaic aspects of the movie.

Jake and Lainey's relationship is full of sexual tension from the start, so much so that they need to create a 'safe word' whenever it gets to be too much and they need to separate themselves from each other in order to maintain the platonic friendship they both agreed to. There is no way this movie would have been as charming had the two leads not come across as true friends the way Sudekis and Brie did. Often times during the film I wondered if Headland simply let the two stars improvise as two close friends would, their rapport and banter felt so organic and believable.

Adam Scott and Amanda Peet put in brief but significant appearances as Lainey and Jake's 'love' interests, though both relationships are approached quite differently and in a way that helps us see the actual growth of Lainey and Jake as people due almost entirely to the strength of their friendship. Jason Mantzoukas and Andrea Savage are hilarious as Jake's friends who have become parents and yearn for the childless days of drugs and sex that lasts more than six minutes. Yes, it's a bit cliche (don't have kids, they'll ruin your life, ha ha), but it doesn't feel stale here.

Alison Brie is once again the MVP, hilariously sweet and charming with an uncanny ability to shift emotional gears in the blink of an eye. But Jason Sudeikis carries his own weight with a nuanced performance as Jake, and his effortless charisma is enough reason to believe he's able to get as much action as he does. It seems obvious to their friends that they're meant to be together, despite their insistence that they're 'just friends' even though it's clear that they both want to be more. It's just that going down that particular path would quite possibly ruin what they already have, and neither is willing to risk it.

While there are some conventional rom-com plot points here, they're done so well that they feel almost fresh. There is no big contrived conflict to keep the two characters apart, no ridiculous misunderstanding that can be solved with two minutes of communication. These two people find each other at just the right time and grow together, despite revolving relationships and one night stands. The question is if they're willing to take that extra step and truly commit. The answer seems obvious, but Sudeikis and Brie make the entire journey entertaining, heartfelt and funny. I adored it.