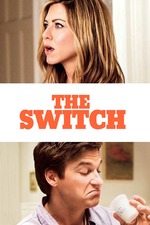 Wally (Jason Bateman) is a man who is clearly in love with his best friend, Kassie (Jennifer Aniston), though he doesn't seem to realize it. Wally is awkward, mopey and pessimistic in a way that makes you understand why he's still single (beyond pining for Kassie, of course). Kassie is a woman who's ready to be a mother and decides to get inseminated with donor sperm. The decision causes some friction between the two friends, likely because Kassie is ready to have a family of her own, and Wally is afraid of Kassie moving on into adulthood without him. He's not exactly supportive of her decision, which prompts Kassie to tell Wally that they 'need a break' from one another. The next he hears from her is through an invitation to her 'I'm Getting Pregnant!' party. While there, Wally meets Roland (a hunky but otherwise blah Patrick Wilson), the donor, and proceeds to get drunk enough that he accidentally dumps Roland's "donation" down the sink. In an effort to cover his tracks, he replaces the sample with one of his own... but of course is too drunk to remember any of this.

After Kassie reveals she's pregnant, she also reveals she's moving away from New York to raise her baby in the suburbs. She and Wally do their best to keep in touch, but years pass and they eventually grow apart until several years later when Kassie calls and informs Wally she and Sebastian (an adorably melancholy Thomas Robinson) are moving back to the city. She and Wally reconnect, and Wally must adjust to not only having Kassie back in his life, but having Sebastian as well.

It's here that the film really becomes more about Wally and Sebastian bonding as Wally begins to notice more and more similarities between the two. Not only in terms of appearance but personality traits as well. Sebastian is convinced he suffers from a multitude of medical problems, and when Wally concedes he suffers from hypochondria, Sebastian is convinced he has the same thing. Sebastian is a quirky kid who collects picture frames and seems to find the downside to everything in life. It would have been so easy for Sebastian to come across as bratty or obnoxious, but Robinson's baby face and downtrodden delivery is far too entertaining. The scenes between Bateman and Robinson are, in my opinion, the best part of the movie. We see Wally grow with every interaction with Sebastian, and he slowly comes into his own as a father (before actually realizing he is the father, thanks to a little help from his boss, played by the always fantastic Jeff Goldblum).

Of course, the conflict here is that Wally has yet to tell Kassie he 'switched' the samples at her pregnancy party, and in the meantime, Kassie has begun a relationship with Roland, who has recently gone through a divorce. Honestly, I don't feel as though Aniston's part was big enough in this movie to really comment on. She's fine as Kassie, and she and Bateman have some decent chemistry, but The Switch really belongs to Wally and Sebastian, and you want to see their relationship blossom much more than Wally and Kassie's, because let's face it, we all know how this movie is going to end.
There are some icky factors at play here. 'Hijacking' someone's pregnancy (at a pregnancy party, of all places... do these really exist??) by switching sperm samples is pretty repulsive and creepy. Yes, Wally was drunk, which attempts to make it excusable, but a quick montage at the end of Kassie going through the motions of finally forgiving Wally is a bit weak, and I would have liked to see a better resolution to that particular betrayal.