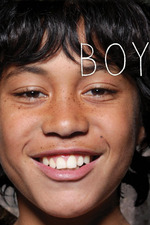 Perhaps as pure a distillation of that inimitable quality called "Taika Waititi" as we could hope to see, Boy is a joy from beginning to to end to end-credits surprises.

As effortlessly and genuinely eccentric as Napoleon Dynamite, as heartfelt as Moonrise Kingdom, as New Zealand-y as Whale Rider, Boy is as strong as, if not stronger than, Hunt for the Wilderpeople in its fusion of comedy, family drama, and magical realism.

I'm really surprised that it hasn't come to my attention before. (Friends may have mentioned it, but I don't recall that.) With Waititi becoming something of a celebrity now, this really deserves to be re-discovered and celebrated.

Fortunately, it's free on Kanopy.