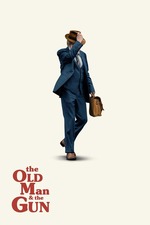 Even the poster admits that this whole period-piece exercise is an excuse to give Robert Redford a respectable curtain call playing one more rogue who steals hearts.

But can we take this seriously as a farewell? This movie's conclusion is a wink that says, "Come on. You know that, given the opportunity, he'll make another movie. Maybe four."

Nevertheless, I couldn't stop thinking about Sissy Spacek throughout. The movie comes to life when she's onscreen. Ever radiant, she's basically playing the elder version of the girl from Badlands: a wide-eyed charmer who's wiser than she seems at first, and who is willing to gamble on a mischievous stranger.

Lowery's retro style gets a bit showy at times — in both the aesthetics and the period soundtrack. But the cast is a joy here in every single scene.

And in a great film about stealing, Tom Waits proves he can still steal any scene he's in. The line I'll take away from this one? "And that's why I hate Christmas!"

This is the first movie I've seen on my new AMC A-List subscription: up to three movies a week on the big screen for $20 a month. Seems like a steal. Which is why this matinee seemed appropriate.