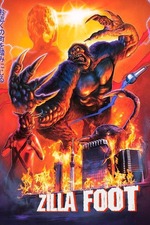 Zillafoot is a perfect storm of bad, but a storm I don't mind weathering. The film serves as the directorial debut for Anthony Polonia, son of Z-Grade director Mark Polonia (depending on who you ask, this is either an insult or a shining compliment.) Anthony Polonia does his best with what he has to work with at the time: literally no budget, gear limitations from 2014 (?), and strange but inspired actors.

The initial cut ran very short for the film, thus extra scenes were added to pad out the run length. Some of these scenes are fun and creative, like a multi-man "Zoom Call" with chairmen from different government agencies discussing how to handle Zillafoot, to hyper-active military scenes involving the whacky hijinx of the soldiers' plan to destroy the kaiju. Other examples of these added scenes are downright lazy and disgraceful, being as dull as stock footage with brutally self-aware dubbing, or simply Youtubers sitting at their desks for five minutes straight spouting nonsensical madness.

The plot is haphazard and makes little to no sense; things happen, aliens appear, people die. It's standard low-budget Kaiju fare. The VFX look nigh incomplete, save for a few moments of an inter-dimensional battle, an interesting "dinosaur" effect, and a final shot of "Zillafoot 2.0" appearing on a misty city street.

Overall, it's hard to recommend this film to most. The plot, characters and effects make it next to impossible to take seriously, which can make it incredibly fun to watch with friends, but even the Kaiju content on display is so bad that diehard K-Fans might have difficulty stomaching it.

I have a personal connection to the film however. I directed the military segments involving the true-grit serious captain, the fun and loony corporal, and the crazed and dedicated cryptid researcher. While our scenes are by no means cinematic gold, they do shine through the film in terms of quality. Whether that is a sign as to the time and our equipment available /prepping taken, I'm not sure, but our scenes along with some other new ones do stand out, and not always for the better. I also provided the final VFX shot of the newly reborn "Zillafoot 2.0," the only moment that I'm aware of where Zillafoot is a fully CG being.

If you want a good laugh, give it a watch, maybe have a drink or two on hand as well. All others, beware.