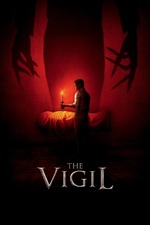 I was aware of this film’s brief cinematic run mid-last year, followed by its physical release at the beginning of this year. However it was Chris Stuckmann’s recent video review of the film that spurred me to watch it sooner. The Vigil sees a man (Dave Davis) provide overnight watch to a deceased member of his former Orthodox Jewish community. When he finds himself opposite a malevolent entity.

The supernatural horror genre is one that has been stagnated for a while. Flooded by endless increasingly terrible The Conjuring Universe features, teen focused guff such as Wish Upon & The Bye Bye Man and dull remakes/sequels of classics, including Poltergeist (2015) & Rings (2017). Luckily The Vigil doesn’t fall into any of these categories, and provides a surprisingly unique and at times genuinely spine chilling 90 minutes.

The Jewish cultural and religious perspective is a refreshing change for the genre and also provides interesting insight and a more personal look into the job of a shomer. The duty of the job is ripe for horror film integration. Just the idea of sitting alone with a dead body is unnerving and the film realises this and follows through all the way. Though admittedly very familiar and cliched at times, Yakov’s (Davis) reason for abandoning his faith is a tragic one. However the film’s shorter runtime and lack of real focus on the event (outside of a couple of brief flashbacks), does hinder the emotional weight of it. That being said, it does make for a genuine motivation for Yakov to metaphorically and literally face his demons.

Where the film excels is in its atmosphere, tone and claustrophobia. The one location setting (largely the lounge/sitting room within the home) works perfectly for the material and that the film takes place over the course of one evening. The lighting and shadow usage is excellent. Your eyes will be constantly darting across the screen and will be swallowed into the dark negative space. The structure is a fairly repetitive one, but tension is built so effectively that it doesn’t really matter in terms of pacing and flow. The jump scares all feel earned and two of which are absolute monsters that nearly made me jump out of my seat as well as my skin. The sound design is fantastic, with wince-inducing cracks and creaks, booming thuds and thumps and ear piercing shrieks.

Dave Davis does a great job in the lead role. Capturing the cynicism against his religion as well as his anxiety and guilt over the event that triggered them. His character growth and arc isn’t particularly unique, but it feels genuine and well earned. Lynn Cohen is creepy and mysterious as widow Mrs. Litvak. Who also hides a sense of tragedy and acceptance of her trapped fate. The demon Mazzick is largely void of personality, but cuts a menacing figure in the shadows and a well designed presence and appearance in his brief whole on screen shots.

The Vigil is a strong little supernatural chiller that nails its unnerving and hair raising atmosphere with some killer scares and well crafted and designed location and direction skills. The performances are strong and carry the admittedly underdeveloped and ‘seen it all before’ plot reveals and character arcs. Certainly worth seeking out and supporting.