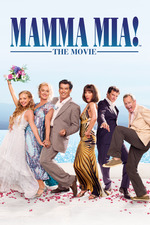 This is another thing dedicated to @MisterGaga for winning one of my contest!

Mamma Mia is a movie Musical adaptation of the Tony nominated show. The movie follows the story of Donna, a mother living in the Greek Islands, preparing for her daughter’s wedding day with the help of her friends Rosie, and Tanya. But little does Donna Know her Daughter Sophie, has plans of her own. A couple weeks before the wedding Sophie sends 3 secret invitations to 3 men who have had a significant part somewhere in Donna’s life, in hope’s to meet her real father.

This movie is easily in my top 10 movie musicals of all time(that list is coming soon). It’s so engaging, and the music is Classic, and so well written. The acting is phenomenal, Meryl Streep gives us another one of her singular Creations, and plays the part of Donna so well, and Streep’s Voice is to die for... as soon as she sing’s, I’m in love. There’s a way Meryl Streep acts that somehow gets the academy all tied up in a knot and say WE’RE GONNA NOMINATE HER FOR THIS CAUSE SHE’S MERYL! And I’m honestly in shock that she didn’t get a nom for this.

Amanda Seyfried gives a break out performance as Sophie and easily was the best part of the film. Her performance throughout the film is so fun and emotional, that i love every part about it. Her character is so fun, and you just can’t help but enjoy it, and sing along with her angel like voice.

The rest of the ensemble cast is outstanding, Christine Baranski, Julie Walters, Colin Firth, Stellan Skarsgård, Pierce Brosnan, Dominic Cooper, and everyone else do fantastic jobs Continuing the story of the film. I personally loved Christine baranski, her performance gave me some very VERY good Belly Laughs. The whole Dianamoes back together was so amazing. And so emotional, it’s so nice.

Now to the music... UGH I LOVE IT. Every song is beautiful, funny, emotional, angry, sad whatever the emotion is at that point in the film, the songs chapter it beautifully, my personal favorites are Honey, Honey, Dancing Queen, and Does Your Mother Know. All 3 of those songs are the most perfect of imagery during the song, the lyrics of each song are beautifully written, and each actors singing in the film are heaven to hear.

Now the fact that this didn’t get an Oscar noms is a bit puzzling to me, cause it should’ve gotten at least Score and Production, those 2 things I thought were magnificent in the film.

Overall this is a wonderful Movie Musical that will go on as a Classic, and an amazing piece of cinema. The whole film just brings me great joy, and Fun, and a bucket full of Laughter.

🔙The Addams Family
🔜A Rainy Day in New York