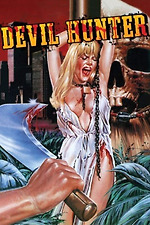 It’s always good to remember, no matter how perverse his pictures get, Eurosleaze King Jess Franco hails from a background in jazz music (which he often used to help provide his films a soundtrack). Unleashing the exploitation legend in the jungle is a recipe for cacophony, in terms of visual, sonic, and subgenre mash-ups. His camera drifts over cannibals’ homes; clearly a small forest in Spain that’s been lightly dressed to appear like the Amazon. Stock bird sounds, tribal drum loops and ominous droning combine into a deafening clamor that seems to bounce off the canopy, before we reach a beach where waves endlessly lap the shore. Indigenous hunters chase human prey in the first scene, before Franco transitions into his usual sadomasochistic WIP template; a blonde model (three-time Franco fixture Ursula Buchfellner) having been kidnapped by a gang of crooks, who chain and molest the beauty amidst the wild setting. All the while, an African tribe cowers in fear due to the bleeding, bug-eyed, lurking Devil God who wants to rain death down on anyone foolish enough to stumble upon his unholy ground.

Perhaps the most remarkable aspect of DEVIL HUNTER is how Franco makes the "cannibal film" distinctly his own. None of Franco's works ever seem to move with a real sense of urgency, content to float along, stopping at numerous tableaux of garish rough sex and violence along the way. The Vietnam Vets contracted by the kidnapped goddess’ management feel like they’re taking a vacation more than being on a search and rescue mission; refusing to even put the bottle down as a nubile, nude woman they recover tells them the girl they’re after is set to be sacrificed to the Devil God (who will literally eat her heart from her chest). No wonder the requisite subgenre ending - where a gorgeous woman in danger is tied to a stake and then massacred by the chomping clan - is transmuted into a veritable low rent dance number, with equally hard-bodied tribal women shaking it in the buff while the model squirms in discomfort (and one of her supposed rescuers simultaneously fucks his way to a slasher film death scene on a nearby yacht). It’s a “copy of a copy” scenario, genre-wise, but that doesn’t matter when you have arguably the most unabashed pervert in cinema history manning the machine.