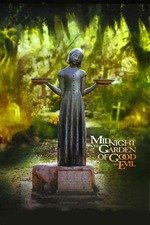 Midnight in the Garden of Good and Evil

“This place is fantastic. It's like GONE WITH THE WIND on mescaline.”

The artifice of high society and what level of eccentricity these snooty communities will tolerate. Had somehow never seen this before now and could’ve bathed in Eastwood’s trademark digressions and tangents for another three hours. Hell, it’s practically an entire film made up of side stories, inappropriate humor, and sly observation masquerading as murder mystery. Also possibly the movie that complicates the reductive post-empty chair perception of Clint’s politics the most. Here, he’s in love with a trans icon, while poking fun at an antiquated establishment’s stuffy rules of engagement. Spacey doesn’t fare so well (despite giving a phenomenal performance), as it’s practically a confession almost twenty years before his alleged crimes were brought to light; the tale of an eccentric predator barely hiding in plain sight.