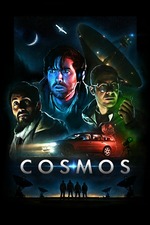 Unwittingly and sinisterly, Cosmos is the perfect film for our current age.

That's not because of the simplicity of the set-up, (three geeky friends playing with astronomy equipment out of a car one night). Or because this premise allows the directors to craft a well-shot film with lots of moody, noir-ish nighttime photography. And not it's because of how the film turns a story about mundane details into something of well...cosmic significance.

Cosmos is the perfect film for our age because it shows a world in which working life is the only possible source of value or meaning. The trio of plucky engineers we revolve relentlessly around are a barren wasteland of career successes and set-backs. They aren't characters. They are employees.

The only drama or emotional dynamic (and therefore development) between them reduces down to their most recent career success or set-backs. There are no emotions and no personal life in sight. I've never seen a non-satirical film about people whose entire sense of self is derived out of which company they work for or used to work for, and how they 'feel' about it.

There is virtually no reference in Cosmos to anything, or any kind of meaning beyond one's employment. The end result is a grim irony: a first contact film in which the humans who make that contact prove to be so profoundly in thrall to corporate messaging about self-worth, that they have utterly nothing of consequence to communicate to little green men.

Cosmos is unwittingly a masterclass on the absolute moral and intellectual vacuum of capitalism and modern working life.

The House of the Devil