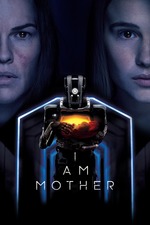 Taking the domestic trope of the overbearing, protective mom into a far grimmer speculative domain, I Am Mother is a sharp, well-paced concept piece.

A film set in a futuristic bunker, whose run time mostly features a single person talking to a robot would be, in most hands, an invitation to dramatic boredom. But Grant Sputore just nails the subtle back and forth between a young girl and her cyber-mom. In the process, he slowly begins to unravel the mysteries of what is (or is not) happening outside of that bunker.

The world-building here is incidental to the central relationship, not the other way around, and it's refreshing to see a sci-fi film that places those interactions at the film's center.

Clara Ruggard is clearly a young talent to watch. Convincing an audience that you have a sincere, meaningful, (ultimately conflicted) emotional connection to a robot for ~2 hours is no easy dramatic feat. She makes it seem easy and natural.

This is also helped by the film's production design, which makes the bunker itself feel tactilely real, yet still somehow murky and ethereal. We never perfectly get our bearings in this space, and there's the constant sense of something eerie and malevolent that might (or might not) be happening just beyond our perception.

Ultimately, I Am Mother is a film about growing up. About becoming fed-up with your parents protective instincts, finding new people to attach to, and coming to realize that those people are imperfect in their own way too. It's a story about the challenges of forming your own sense of yourself and the world you live in in, which is the major challenge of becoming an adult.